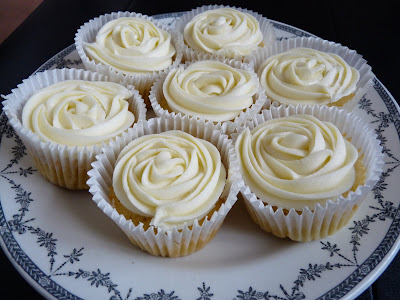 So I've indulged in a little comfort baking lately. Which is to be understood given my current situation. I'm not saying it's the best idea in the world, being that it means I now seek comfort in baking rather than, I don't know, socialising, meeting people and friends. These days my social circle is limited to a few stress-heads that I know and love, and somehow I've left the rest of my world just to fall away because it's too hard to concentrate. Either way, enjoy some of my little delectations. The above is a Lemon cupcake with lemon butter icing.

The recipe for the cake is as follows, but it gives you slightly too little for the cupcake size and alarmingly grease soaks into the cupcake papers like crazy.

The buttercream icing I suggest you find your own as, whilst I had a recipe, I possibly ended up putting twice as much icing sugar in as required, and felt it could have used a lot more lemon juice to give that punch.

The swirls I was quite happy with, a bit of fun in my mundane world. I've also got a bowl left over so I better bake something else this week!!

Method:
1. Cream the butter and the sugar together.
2. Add eggs.
3. Add everything else.
To be honest, you could just shove everything in and mix it, this recipe originally called for a food processor. But mix, pour, make 12 slightly undersized cupcakes.
4. Bake at Gas Mark 5 for 15 minutes until springy.
5. Cool it down (that's hard for me!!) then cut a little cone out of the top (and eat) and fill with a teaspoon or so of lemon curd (or jam I suppose - blackberry would be very cool).
6. Top with buttercream (125g butter, 4-6 cups of icing sugar, 1/2 lemon's juice, 2 tbsp milk) 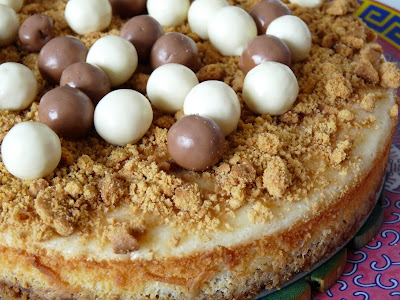 This is the Malteaser cheesecake I made recently. Not a favourite, well people ate it! But they tend to with the cheesecakes because they don't necessarily become "second-rate" as such after the first five minutes out of the oven! It's my usual recipe for cheesecake, but topped with crumbled digestives and malteasers. There was also an abundance of malteasers crushed in when I made the base. I'm not a fan, but I think if I tried the baileys chilled malteaser cheesecake one day I might be a convert.
Posted by pink-kimono at 20:04 1 comment: