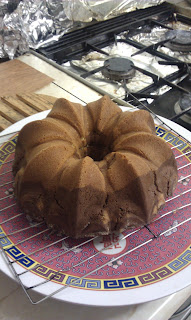 Yes I bought another bundt tin. It was on sale!! Okay I suppose Selfridges puts them on sale every year but still. I think if I get the Bavaria tin which is used mainly for the Tunnel of Fudge cake, I will be happy and complete. Just as well they don't sell them in the UK that frequently, and by frequently I mean in a place other than the internet.

Today's cake comes from the book Bundt cookbook by Nordic Bakeware. By book, it's more of a pamphlet with some very random recipes in. Unfortunately a lot using mixes, but bizarrely lots of gelatin moulds. Moulded salmon anyone? In a ten-cup mould no less. Anyway, the recipe I used was the Orange/Chocolate Marble cake, but as we didn't have any orange extract I used almond. Things you should also know was that I screwed up reading the recipe and forgot to dissolve the cocoa in water before I added it to the mix, which was why I was mixing it thinking, why did I whip egg whites if it ends up as this stupidly stiff mixture?? Oops. Whereupon I threw in the water and it turned into liquid chocolate. It turned out very well at the end of the day, and rare for bundts, it needed less than an hour to cook. The proper recipe is as below, I just omitted orange peel and replaced the orange extract for almond.

Method:
1. Cream butter, sugar, add egg yolks.
2. Mix in flour, baking powder and salt, alternating with milk (usually done by about 1/3 of the dry at a time)
3. Fold in whipped egg whites. (Mine was relatively stiff as a mix, but it does loosen chiffon style once you beat the first half of the whites in.)
4. Halve the mix, mix blended water and cocoa into one batch, the orange flavourings into the second batch.
5. Marble in the pan.
6. Bake at 350 degrees which is about Gas Mark 6 for 50-60 minutes. A little less would have been fine so start checking after 45min. 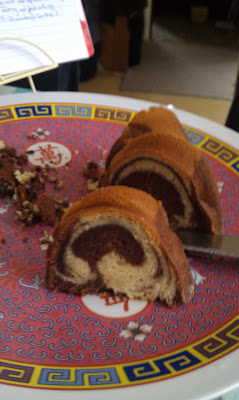