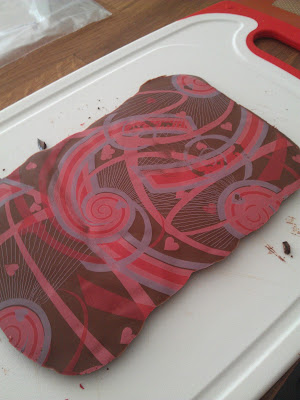 I bought this transfer ages ago on a whim and finally tried them out for my sister's birthday (faux birthday as we celebrated with Bea's of Bloomsbury cupcakes on the day!) Since they were a bit worse for wear you can see where the transfer was a bit patchy even before we stuck chocolate on it, but it decidedly worked better with a thick coat of milk chocolate than the dark. I assume it's because there's more fat to make the transfer stick but that's a guess. It worked anyway. Pretty simple to use. Put it out with the transfer on the right side. Pour over chocolate. Leave to set. Done. 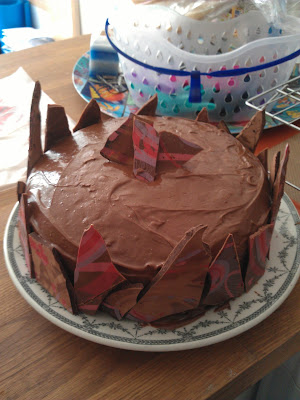 The cake was an oil based sponge which I won't make again (Rachel Ray) but that's because I always know that any sponge that involves a lot of milk in the mix tends to be a bit "tighter" and I don't like that texture. The coating is some chocolate stuff I bought in Brazil. Bear with me, that was a year ago but it worked fine. For some reason when I started buying food stuffs from abroad, I bought chocolate coating in both Brazil and I think Madrid? Good stuff. You just put it boil in a bag style on the hob and then cut it open and voila, instant er... not buttercream but kind of like an emulsified moussy ganache which sets quite nicely.

What I learnt about chocolate and transfers has to be that it's pretty hard to make nice NEAT triangles out of the chocolate as it shatters under the blade. Ergo the artistic chunks above. Tasty all the same and didn't need a filling. Till the next time. x
Posted by pink-kimono at 21:08 No comments: