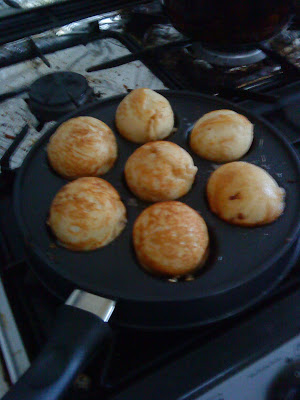 So I got me an Ebelskiver pan :)
For those of you as blank as I was, basically I was perusing the Williams-Sonoma website since I WAS going to be going to NY but never made it. But my friend was lovely enough to buy one and bring it back for me.
Google it. Youtube it. Ebelskivers are basically pancakes (with a touch more egg white) which you can fill with things like nutella or jam.
I used the recipe that came with the pan but observe. First go, they look pretty cute although a lot easier to get round rather than pancake shaped if you don't fill them. Lots of tips online on how to turn - I used wooden chopsticks. Easy peasy. Although if you do fill them, the jam can go a bit weird and turn it purple :)
Posted by pink-kimono at 18:47 No comments: 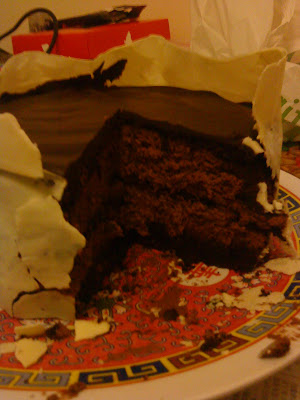 So I have a week off work and this is what I do with it. The great big cake experiment. There's this anniversary thing for the forums I frequent and so needed to try. The above is a chocolate mousse cake from "Cakes to Celebrate Love and Life" with some large amendments. Below is the amended versions with some notations. The main aspect would be that it requires a lot more chocolate to make the band but they didn't give that much in the line of instructions for that.
Chocolate cake
Ingredients:
2 cups sugar
1 3/4 cup plain flour
3/4 cup cocoa
1 1/2 tsp baking powder
1 1/2 tsp bicarbonate of soda
1 tsp salt
2 eggs
1 cup milk
1/2 cup vegetable oil
2 tsp vanilla essence
1 cup boiling water
Method:
1. Gas Mark 4
2. Grease an 8 inch cake tin with a removable base.
3. Mix all the dry ingredients together.
4. Add the wet ingredients aside from the boiling water
5. Mix and then stir in the boiling water till blended. It will be ridiculously wet.
6. Pour into the pan and bake for an hour or until a skewer comes out just slightly damp rather than raw cake (think brownie).
7. Cool in the pan for ten minutes, turn out, then cool completely.
8. Slice into three layers. (I used a very large serrated bread knife and a palette knife to cut and move onto pieces of greaseproof paper). The book said with a 26cm pan it should give 3cm layers...don't know how, my cake I had about 1.5cm but it was sturdy enough to complement the mousse.
Chocolate mousse (YOU NEED ABOUT HALF OF THIS)
Ingredients:
330g dark chocolate
150g butter
3/5 cup milk (150ml)
2 1/2 cup cream (I used double)
Method:
1. Boil milk and tip over the grated chocolate and cubed butter and stir till dissolved. (Now whilst the book said this, I'm not sure how it works. Maybe if I actually grated the chocolate, but who can be bothered with that? Heat the butter, chocolate and milk with a double boiler or use a microwave.)
2. Cool the chocolatey mixture to room temp.
3. Whip cream till soft/stiff peaks and then add the chocolate into it until a glorious chocolate cream.
Chocolate ganache
Ingredients:
300g dark chocolate
1 cup (250ml) cream
Method:
1. Heat chocolate and cream together over a double boiler till mixed.
2. Leave to cool. Will become nice and thick but still pourable. FYI. Different proportions are okay, you just need to get it roughly right although you may have to chill it overnight if you want something stiffer/spreadable.
Chocolate band
Method:
1. Take a piece of baking parchment and measure it so it wraps around the cake with a bit of overhang.
2. Cut out exactly what you want the band to look like around the cake.
3. Put on top of another piece of parchment and take some melted chocolate - I used white, and spread thickly. I didn't use nearly enough but that was laziness on my part. I used a butter knife. Go right over the parchment and onto the parchment underneath.
4. Leave to cool for a bit. Officially until the chocolate loses the gloss a bit.
CONSTRUCTION:
1. Take cake, smother with mousse, put another layer on, put on mousse and top with final piece of cake. Neaten up so it looks level (spare the spirit level and use a piece of greaseproof and press gently on top). Fill the gaps with more mousse. If you were being good you should fridge it overnight.
2. Pour ganache over it and around the sides. You should fridge it till it sets but it was a cold kitchen that night...
3. Take the chocolate band, wrap it around the cake. Leave the paper on and fridge/leave the cake to cold.
4. When you're ready to serve, peel the paper off the chocolate band, leaving it standing tall.
PERSONAL SUGGESTIONS:
The cake to me had waaaaaaaaaay too much cream. It wasn't bad, even the day after. Kind of like a chocolate trifle. But I like cake. And moreover I have to feed people on serviettes. The next time I plan to make a vanilla sponge, same recipe just no cocoa and flour to replace. and fill up the cake using only half the mousse.
I'd top with fruit (google Patisserie Valerie for examples) or malteasers.
The band would be a lot thicker.
However, I may be adjusting it completely and just ganaching the cake and decorating with chocolate sticks and a ribbon. Who knows? Experiment continues. xx
Posted by pink-kimono at 17:38 No comments: