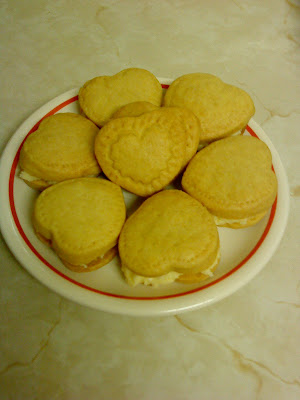 I made custard creams from Nigella Lawson's Feast today. A few tiny adjustments because we didn't have (and I don't like) shortening - we used butter as a replacement, and I don't own a processor so I rubbed in the fat and the egg. It was ridiculously flaky but not as delicate as her recipe suggests. The biscuits themselves could have been rolled a lot flatter than 5mm and would have been a lot nicer - note that for once it wasn't me being lax!! I did make 29 cut outs in total, the recommended is 28-30! Maybe next time I'll try the shortening. Or maybe I'll just buy a packet of custard creams... Happy Valentines (and Happy Chinese New Year!)
Posted by pink-kimono at 20:52 No comments: 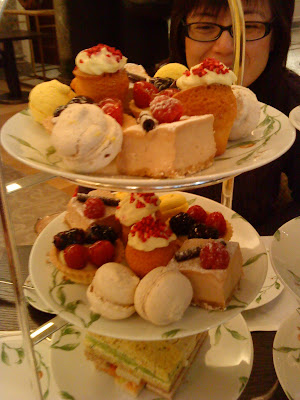 http://www.afternoontea.co.uk/index.php?option=com_content&task=view&id=29&Itemid=3
There was a 25% off deal in January and so we went as a family (well sis-in-law (in pic), bro, my sis and me...) It is located nicely behind Selfridges and is just past the lobby. Unfortunately, in a way, it IS the lobby since the lifts are just there without much separation from where we were sitting. On the plus side, it was very family friendly as there were several little kids around. Also a nice place to waste the afternoon since there is a gorgeous little sofa and fire area which one couple had commandeered. Maybe with some foresight it could be booked, but I wasn't there for the romance ;)
To the tea! Firstly, choice of tea was pretty good. Included the greens, rosebud, but also hot chocolate which my sis-in-law chose. Me, I went for the Assam. The closest thing to PG Tips is basically what I chose to go with afternoon tea. Anything else just feels wrong. Bonus points, it came in a teapot and in leaf form. I'm not a snob, but when it's afternoon tea, unless we're eating in a caff, teabags are just not done.
We started with a little apres-dessert? Is that the word? Surprise course. I love surprise courses. Ours was a raspberry coulis topped with a sort of yoghurt mousse with a sprinkling of pistachio in a shot glass. Yum. The menu otherwise for the cakes is as follows:
- Lemon macaroon, chocolate ganache
- Caramel macaroon
- Chocolate cheesecake
- Strawberry n cream topped muffin
- Fruit tartlet
The sandwiches weren't anything to write home about. The macaroons weren't quality ones and a little rough around the edges. The cakes were definitely better than the Carnaby, however we did get very *creamed-out* Brilliantly, they let us rest for ages before bringing on the scones. These were made fresh for us and you could tell!! They also brought butter when requested and we got to take the leftovers home. Happiness. I'd definitely go again once they changed the menu (it's all about new things...) but will go with friends if they ever come down.
Posted by pink-kimono at 21:17 No comments: 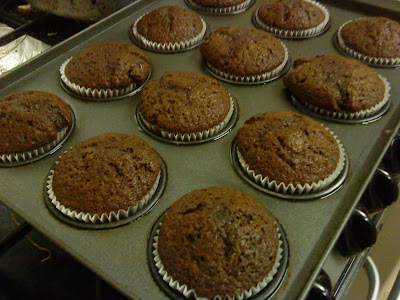 I picked this recipe up in the Metro ages ago because the picture looked very pretty and I've been to Primrose bakery in Covent Garden once before (and unlike Hummingbird, I think the cupcakes are very nice if not particularly remarkable against home baking).
I debated the merits of frosting, but decided against in the end. I'll write the recipe here as per the newspaper cutting (in my odd bullet way). Since the frosting was chocolate it wouldn't have achieved what I thought was missing from the cupcakes - a stronger orange taste. Next time I think I might have to find some orange crunchy bits or something. An orange aero crushed up maybe. It was just missing... something.
Ingredients:
115g dark chocolate
90g unsalted butter
175g caster sugar
1 orange zest
2 large eggs
185g plain flour
1/2 tsp bicarb of soda
1/2 tsp baking powder
1/2 tsp salt
1 tbsp milk
1 orange's juice
1. Melt chocolate and leave to one side for a sec (I use a microwave, you can use a bain-marie... most people have established that the best way to melt chocolate is not to sit on it, albeit it can be unfortunately effective...)
2. Cream butter, sugar and zest.
3. Add egg. Mix. Call this Mixture A
4. Flour plus bicarb, baking powder, salt etc in one bowl. Mixture B.
5. Milk and juice. Mixture C.
6. Now, put the melted chocolate into the butter mix (Mixture A) Mix in (don't worry, you're going to mix some more so it's not going to matter too much).
7. Add 1/3 flour stuff (Mixture B)
8. Add 1/2 juice (Mixture C)
9. Add 1/3 flour stuff (Mixture B)
10. Add remaining 1/2 juice (Mixture C)
11. Add remaining 1/3 flour (Mixture B)
12. Now if that wasn't too complicated (if you give up just mix it all in gradually in batches, it really doesn't matter that much although it's preferable to end with the floury stuff. )
13. Put into cupcake cases (I have 12 muffin sized ones)
14. Bake for 30 minutes Gas Mark 4.
15. Prod gently/shove a skewer in to check.
Enjoy the yumminess.
Posted by pink-kimono at 21:03 2 comments:

*Giddy* - and some carrot cake 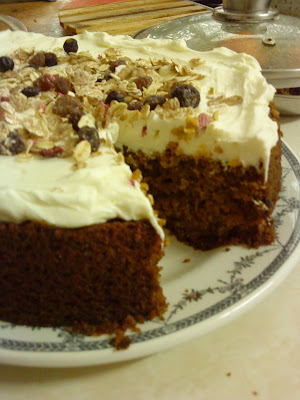 Am extremely happy today. Have discovered Nigel Slater's Real Food on Youtube (under TV, Food and then it streams from 4 on Demand)
http://www.youtube.com/shows?p=None&s=sftv&b=23
But, other little things I've been up to. Made a carrot cake today. The originating recipe was from James Martin's Desserts, however I made some fairly dramatic changes to it. None of the decoration, a different frosting, different flour, different flavouring, different sugar, no nuts etc etc.
My version therefore is as below:
Ingredients:
200g grated carrot (two big-uns..)
175g demerara sugar
2 large eggs
150ml sunflower/veg oil
200g self raising flour (I comboed baking powder and plain)
1 tsp bicarbonate of soda
1 tbsp cinnamon
120g sultanas
50g dessicated coconut
Frosting:
300g cream cheese
2 huge tbsp icing sugar
1/2 lemon worth of juice
Muesli
Method:
1. Sugar, eggs and oil. Mix.
2. Add flour, cinnamon and bicarb. Mix.
3. Put in sultanas, coconut and carrot. Mix (Note, I did a quick soak of the sultanas in a squeeze of lemon and a bit of cordial but on tasting it didn't really show since I had nice organic sultanas anyway.)
4. Pour into a pan (mine was about 8 inches, lined with parchment on the base, greased at the sides, and had a loose bottom.)
5. Bake for approximately an hour at Gas Mark 5. (Start prodding with the skewer at 35minutes)
6. Tip the humped back mary out onto a plate and leave the flat side up to ice. (Don't have to, but it saved me a dilemma of how to get it back down...)
7. The frosting. I used a couple of large, heaped table spoons of icing sugar (to be technical it was fondant sugar but that's just because that's what we had), dissolved it in a decent squeeze of half a lemon (we had lemon in the house), mixed with a 300g pack of philadelphia cheese to taste.
8. Spread around and then top with a sprinkle of muesli. Mine happened to be the uber pricy but 50% fruity Dorset brand but it is pretty and was damn yummy. Ah cake.
Posted by pink-kimono at 20:35 No comments: