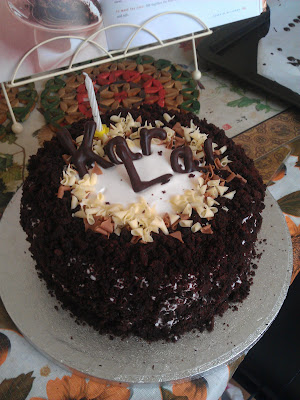 It's not the most elegant of cakes. It's covered with crumbs which defaults to messy. Very messy. Messy in a sweep all the counters and a few floors cake. It is however, really rather yummy in a Sara-Lee / Trifle kind of way. I did this for my sister's birthday when she requested a chocolate and cream cake. I didn't quite do double cream but it did meet the not too sweet criteria.


I would say this though. Lower the sugar in the cake. The frosting is actually really nice. Not too sweet, pleasantly foamy and easy to cover the cake. The cake itself just has a slight aftertaste which may have came from my choice of chocolates and cocoa. Words of warning to follow: Watch out when you transport it. The top two levels slid an inch across and left the rest of the cake... it did gently smush back in place, but just in case it's for company. Warning 2. The book may have it showing beautiful, full, crisp white layers in between the chocolate. Mine... less so. And based on the internet, most people had the same smushiness. It tastes great anyway. Just don't expect a sliceshot.


The recipe cake from Dorie Greenspan's book and is on the internet already - the below is my abbreviated / bastardized version.

1. Sift together the flour, cocoa, baking soda, baking powder and salt.
2. Cream butter and sugar, eggs, vanilla and the cooled melted chocolate (add in that order)
3. Add dry ingredients alternately with buttermilk, ending with dry.
4. Add boiling water and then chocolate chips.5. Put in lined pans (I used 3 x 8 inch round pans - the recommended is 2 deep 8 inch pans)
6. Bake for 30 minutes
7. Cool. Now the book says you have two pans, you slice into two and crumble one of them. In my case I had three cakes, I leveled them and ended up with enough crumbs. Potato-PoTAHto... it's all the same result.

Frosting:
1. Egg whites in bowl. You're making a kind of Italian meringue thing here. Finding a helper or having lots of space helps.
2. Sugar, cream of tartar and water in a saucepan (small) and boil/stir a little bit to begin with.
3. Get it to 235 degrees F (I started before this) and start whipping the egg whites with an electric whisk. Medium/fast is good, you want it white and fluffy and holding peaks the way meringue does without any sugar.
4. Get the sugar to 242 degrees F (soft ball) and then tip the molten sugar into the egg whites whilst whisking.
5. Continue whisking till the frosting is room temp and the bowl doesn't feel hot any more.
6. Spread on cake and shove crumbs around the side. Tah-dah!!!
Posted by pink-kimono at 22:48 No comments: 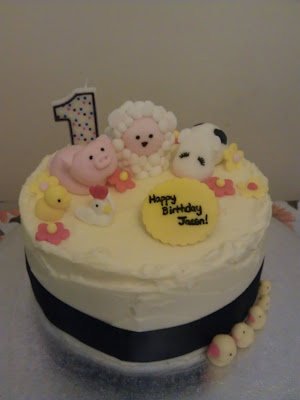 My nephew turns ONE this week and so we made a cake to celebrate. This little number was my usual vanilla buttermilk sponge, which encountered a lot more problems than usual. Check this. Firstly I forgot to put the sugar in which I didn't notice until I poured the batter into the tins - when I thought, hang on, usually there's more of it. Which after tipping back into the mixing bowl to remix, might have resulted in the cake becoming a little more flat than usual.
Brilliantly though, my solution was effective - slice the layers really thin, sandwich with whipped cream and peaches and you don't notice the texture issues. Really. The peaches were so beautiful. I have to make a chinese style fruit cake with them before the season is over. White peaches. Beautiful and pale with a light flush. It was such a shame to hide them inside a cake. 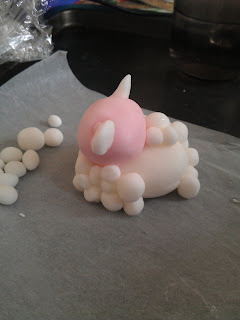 This is the sheep in production. It was my first time working with fondant for modelling. We've played around with making roses and little flowers etc, but I did desperately want to make an Old MacDonald cake because it's my nephew's favourite song. Hence the fevered searching on youtube. As it was, once you watch them once and understand the principle, you don't need it anymore and you just freeze frame it on the final design. I did want to make a little pony to go with, however I realised it wouldn't fit on the cake.
The first thing I'd say is that it is a LOT easier to make than I thought. I thought fondant animals would be really difficult. It wasn't that bad. One thing I would recommend is the food colouring pens. Very useful for the eyes. I used ready made white and yellow icing, mixing with liquid food colouring in the main despite buying a load of paste. Guess I need to find some use for that now. The liquid food colouring leaves the fondant a little sticky, but it's still okay to form things with. The other little fyi I would say is, don't put fondant in the fridge. It ends up damp and the icing pen I used to do patches on the cow ran. I didn't plan on putting it in the fridge but we had to save the cake a night later than planned and if we didn't fridge it the cream and fruit would go a bit squiffy. 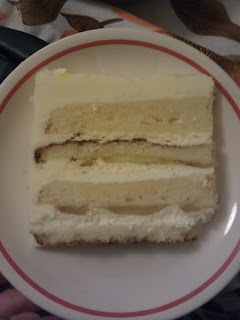 Picture of a cake slice. We sliced around five millimetres thick. Six people ate a quarter of the cake. It's a sweetness thing I think. Buttercream is one of those things we're not a major fan of. It would have been nice to work some green or blue fondant to cover the cake but we hate fondant even more than buttercream. One day I will overcome my issues with the stuff, or make marshmallow fondant which might be tastier, but until then, a bit of buttercream, unfortunately overworked by the end of it, did the trick.
My sister has her birthday soon. I think she'll be a lot happier with a chocolate mousse cake bought retail though!xx
Posted by pink-kimono at 22:53 No comments: 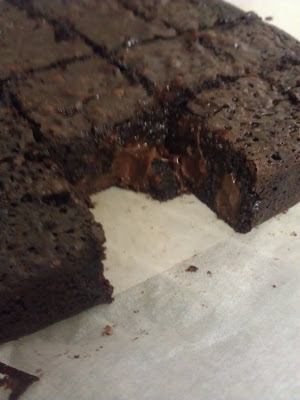 I'm gonna say it. I like these better than my chilli brownies. Check out that picture. I took them to work the next day. The chocolate lumps were still molten. No idea how the science works but it tasted yummmmmy. They didn't have the papery crust as promised, but possibly it's my oven. As it was, it was blatantly uncooked  when the timer pinged so I left it in for ten minutes longer, then turned the oven off and left it in for a further ten minutes. Bizarre, but just the mood I was in. Anyway, the recipe was from Dorie Greenspan, but I omitted the coffee, the nuts and the cinnamon and because my tin was about 8 inch square, my brownies were about an inch square (I like small brownies so they don't bend and break). Recipe found already typed by this lady.
Posted by pink-kimono at 19:30 No comments: