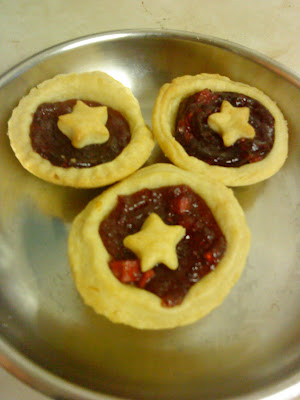 'Ello all. One assumes that we are all fed and... fed. Quite possibly you are hitting the mad Christmas sales like the rest of the world. I was quite petrified on entry to M&S in Marble Arch that we pretty much left as soon as we got there. Scary. Anyway, here's my baking run down - there's not much in fairness since we were mainstreaming on the savoury stuff. A chicken, some pork, a forerib of beef for boxing day. I did however make some truffles which though very yummy, pretty basic - chocolate, hot double cream and a drop of peppermint essence if you fancied it. I also made mincepies with some cranberry mincemeat from Waitrose. The recipe was from Nigella's Christmas. Since SOMEONE complained that we never get to see the failures, I want to post this. Personally I don't think of it as a failure - I KNEW it was going to bubble over, but then I wanted the volume of mincemeat that we had. If you don't want it to do this, one option is to put a lid on it (literally!) the other is to only fill it with a little bit and then top up later. It's yummy for me anyway (who was the only person who liked mincemeat to begin with, but dealers choice. For artistic-al ones... look away. 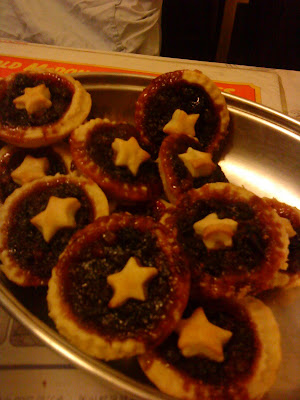 Other things... we had a white Christmas here in Herts, but as it had been white for a week it's less fun. A few funky gifts from the relatives - a Wreath cake tin?? Will be making that this week so look out for that if you are... well that bored :P Enjoy your Xmas everyone!!
Posted by pink-kimono at 14:30 No comments: