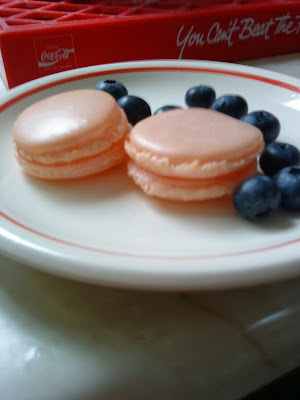 I've been trying to do macarons for awhile, (okay I've tried like twice?) and I think this actually worked. Funnily enough though, the should-have-been-a-failure ended up better than the ones that were text-booked.
The recipe I followed was as follows here. It's the one in the comments which I reproduce here.
110g icing sugar
60g ground almonds
(sift these together after whizzing down to a fine powder in a food processor)
Then beat up 60g egg whites (usually 2 eggs' worth) with 40g caster sugar and a LITTLE bit of food colouring (a tiny dot of the gel stuff is much better and more intense than the liquid stuff), untill you have a firm, shiny meringue.
Fold this gently, a third at a time, into the almond mixture. DON'T overmix; when it's just incorporated part the mixture with your spoon - it should slowly flow back together like 'molten lava' might. (If you can picture such a thing)
Then pipe circles by holding your piping bag still and squeezing it a bit to form a neat blob. When your baking sheet is filled, hold it firmly and rap it down on the worktop to pop any air bubbles. Leave out to rest for 15 minutes then bake at 170C for 10 minutes roughly. They should have formed those frilly 'feet' and come easily off the baking sheet.
I didn't have any food dye gel but I had red liquid stuff which I put almost a capsworth in. I put about half a cap of rose water in as well and sandwiched it with apricot jam.
Oddly enough, the egg whites were non-stiff because I used the same bowl I used for the other macarons (with the greasy almond bits in) but as a result, these didn't have the humps and peaks that the other ones had, and had perfectly even feet. Food for thought. 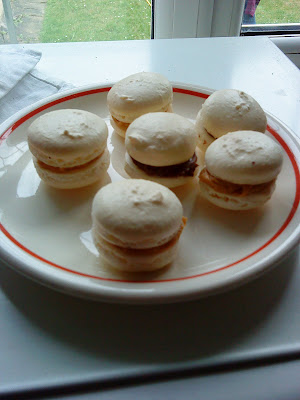 Here are some random bakes from today - cherry and almond muffins. 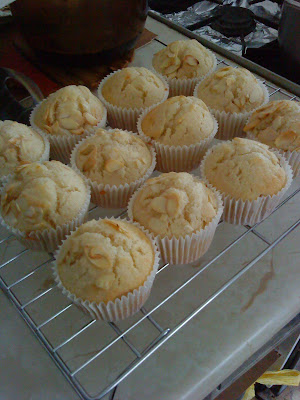 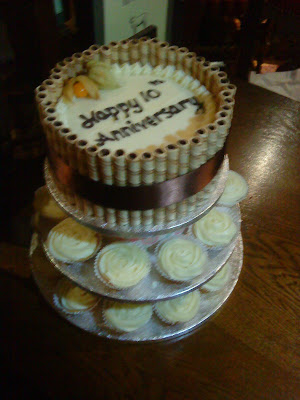 So it was the tenth anniversary of this web forum I belong to - see right for link, and we were asked if we would consider making some cakes to mark the occasion. Much stress!! There were two practice cakes where I tried to make a chocolate gateau, but finally decided that the chocolate mousse filling would make it incredibly difficult to eat on serviettes. But, here it is finally. Despite dropping my ipod on the "y" in "Anniversary when I put on my coat on the train (it landed on the clingfilm which I think saved it from being squished completely!). Despite the pouring rain and Piccadilly Circus closing most of it's exits because of the flooding. Despite me wrangling for my umbrella and mobile with cake boxes in each hand. It made it through the storm!!!
The cake itself is a Vanilla Buttermilk Cake from Sky High Cakes. I've made it before but for cupcakes (the lemon jam centre ones). This time I did try to emulate cake flour to an extent by replacing two tablespoons of my plain flour with cornflour. Will need to try with the proper stuff at some point. The recipe for that is here. I cooked with individual cake pans but won't attempt to give the time for it. Just check after half an hour and depending on two layers or three it will change the timing. Of course you could just... buy the book?
I layered it with strawberry jam and lemon buttercream. The buttercream was approximately 250g unsalted butter, 1/2 cup lemon juice and 7-8 cups icing sugar. I use a recipe and then go by texture when stirring.
The wafer rolls were Askeys and you do decide how much cake you are going to use to match the height. I did have a layer of cake left but was going to fill the top with fruit which would have made it level. After I put the chocolate letters in though (ice melted dark chocolate onto baking parchment and leave to set) it was apparent there wasn't enough room to do so attractively. So, wafer rolls around the side, some cape gooseberries on the top, a tiny bit of piping to hide the fact the cake doesn't quite have straight sides, ribbon around the whole caboodle, et voila. Cake.
The cupcakes were made from the Usbourne cookbook for fairy cakes. 90g of self raising flour, sugar, butter and 2 eggs, which most cake bakers wouldn't need any more instruction on, Gas Mark 5 for 15 minutes in my case. It is the easiest cupcake recipe ever and makes 12 fairy cake sized cupcakes. The icing was enough to cover 18 conservatively.
Lalala. And that's about it for cake. I'd like to say it came out pretty well, holding up to the elements and the klutziness that is me. The sponge is a really soft sponge and I don't think it would hold up to fondant or heavy decorations. The wafer rolls were superb protection (I don't own a proper cake box that fits). If you want to look for them, I used Askey's which are 99p from Tescos (see the ice cream wafer section) and £1.06 from Waitrose. I have no idea where the 7p goes.
The cake stand I made from here. I didn't wrap the cake drums in ribbon though - I just bought paper and sellotaped.
Good night and god speed, I'm making savoury for awhile... oh but I have met a 13 year old boy who is allergic to dairy and eggs so I might be meeting the challenge with some vegan baking soon :) 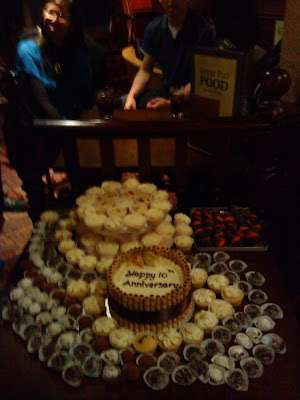