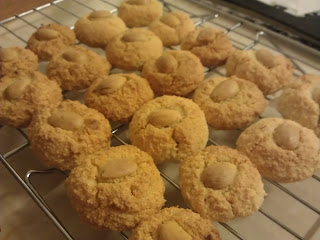 This recipe is so easy. It is unbelievably easy. And it tastes AWESOME. Severe overuse of that word but I swear it's true. Do you know those almond macaroons you get at the supermarket or at the chainstore bakeries? Or at the occasional artisan market stall. *snorts* I love these. My sister loves them more. We're not talking french macarons and if you're not a fan of those, these are definitely not the same as the guy at work hates those and loves these. These are, in the shop bought form, large round cookies stuck to rice paper, delightfully chewy, with a fat almond stuck in the top. If you made these a bit bigger, you'd get that. Anyway, my recipe came from Alldessertrecipes.com based on a google and ignoring any that forgot to tell me how many eggs I needed.

Technically these make 12 if you make a decent size. I made 18 and they were reasonable hershey kiss cookies sized. They don't spread too much either, easily just larger by 1cm in diameter max after.

Method:
1. Heat oven to Gas Mark 5 (190°C/375°F)
2. Whisk the egg whites to a froth (by froth I mean use a fork and don't look for peaks, just breakdown of the eggy stuff.)
3. Chuck in caster sugar, ground almonds and almond essence. i.e. everything that makes sense to go in.
4. Mix to a paste (see why we didn't need peaks?)
5. Roll into balls (the first one is easy, the last one is a sticky mess that clings to the leftover stuff on your hands... use two spoons if you get stuck.)
6. Stick on the rice paper lined baking tray. (Now I'd say you can save on rice paper if you make these more than once as you can estimate the spread and therefore just put cut pieces of rice paper and put them under the respective balls. Odds are though, you won't make these every day - though it's easy enough to... so in six months time you're looking at saved out of date rice paper anyway. Saying that... I've just used two months out of date rice paper and have no idea what the difference is.)
7. Stick a blanched almond on each. (I like to press down because they can catch a little in the oven.)
8. Bake for 20 minutes till gently golden.

Now that's done... I have to say, they are yuuuuuuuuuuummy.... but with one pitfall. They are not the cheapest of baked goodies. £2ish for ground almonds, another £2 for the blanched (although you get far more than you need), rice paper.... it's pricier than my usual bakes, but look on the bright side, you end up with twelve and they usually charge 79p for each in the shops.
Posted by pink-kimono at 22:35 No comments: