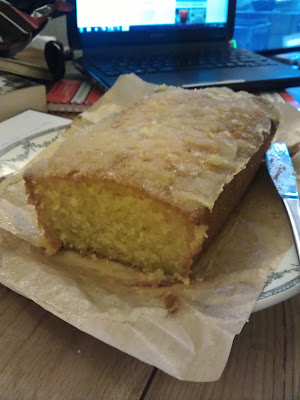 This is getting worse than my ACTUAL journal!! When was my last post? Err... best not to ask.

Forgive me - I have an excuse. I have many excuses *slaps self*. I moved into my own place. Ergo tiny kitchen, lack of equipment.... who am I kidding? I've baked quite a bit here, but nothing too interesting. The first bake was a rhubarb eve's pudding of sorts, then there was a brownie at my housewarming, lemon curd bread and butter pudding for my neighbour, key lime pie... for my neighbour and my colleague... the list goes on. It's just that there wasn't anything particularly inspiring as such. Until this. A lemon drizzle. Which I've probably baked a million times before. But this time, I used the Guardian's "perfect" recipe. Which, apart from using normal granulated sugar instead of demerara on top (this is what happens when you leave your purchase on the till in M&S - picking it up tomorrow!) I actually followed the recipe. It was yum. The best to date. I'm kind of annoyed it has ground almonds in - I prefer my food cheap and those things... aren't cheap. The possible reason it tastes better than my usual is that I actually bought a MICROPLANE grater. Yes I think these things have been around since Nigella Lawson went on her first carb-free diet, but still. Repeat: I'm cheap. So I finally bought one - naturally it was the only thing in Selfridges that WASN'T on sale yesterday, but it makes beautiful zest. I swear, my lemon was balded in seconds. No more picking out the odd bits of zest stuck to the grater.

The recipe is here - and for some reason the site crashes a lot when I'm on  my work PC *ahem* lunch hour surfing only! And they're reaping the benefit since I'm taking most of it in tomorrow.

Just in case they pull the site I repaste it here:


175g butter, softened175g caster sugar2 unwaxed lemons3 eggs100g self-raising flour75g ground almondsA little milk100g demerara sugar
1. Pre-heat the oven to 180C/160C fan. Grease and line a 2lb loaf tin with greaseproof paper. Beat together the butter, caster sugar and the finely grated zest of 1 lemon until light and fluffy. Add a pinch of salt and the eggs, one at a time, beating until well combined before adding the next.2. Sift over the flour and fold in, followed by the almonds. Add just enough milk to bring the mixture to a dropping consistency (so that it falls off the spoon), then spoon into the prepared tin and even out the top. Bake for about 50-55 minutes, until a skewer comes out dry (crumbs clinging to it are fine).3. Briefly mix together the remaining lemon zest, and the juice of both the lemons with the demerara sugar, then poke holes all over the top of the warm cake and pour over the drizzle, waiting for the cake to absorb one lot before adding the next.
4. Allow to cool in the tin before turning out.

Oh and my second excuse - exams. Welcome to CFA. Welcome to the suck. I should have probably done this exam a decade ago when my old colleagues and grad year were doing it, but I was sane back then. Apparently I am less sane now. *High five for old age*
Posted by pink-kimono at 23:27 No comments: