So for the first time ever, I headed out for some "fine dining". Well I say first time, being that usually someone else, e.g. a boss or the company pays. If we're talking company paying, we've been to Quilon (an upmarket, michelin-starred Indian) which was nice, Bank, canapes at the Savoy... the list isn't really that great for someone who works in London and in finance tbh. Hmm. So anyway, my resolutions was to try and break out a little bit. Eat the budget lunches and max out for some nicer meals. Maze was the obvious choice for me because I've been looking at the peanut butter and jelly dessert for AGES and this weekend I went there.
http://www.gordonramsay.com/maze/menus/alacarte/
I decline to add any pictures because it was seriously dark in there, albeit there's plenty of pics online by other bloggers. The decor is a bit Japanese teppen-yaki, and a bit hotel lobby - both of which I spend a bit too much time at. Bathrooms are individual and okay. The seating was actually really bad for my back (no lower back support). The service and staff were actually very good (thankfully given the service charge tabbed on). Me and the other people around were dressed in jeans so it is relatively casual. No teens as far as I can see, but nothing snobby about this place.
Funny thing is, the menu is just PEPPERED with the poncey stuff. i.e. the stuff off Great British Menu. Horseradish snow. Raspberry gel. Squid paint. Anyway, we opted for the a la carte as it offered us choice. The tasting menu is around the same price. I had two cocktails (£10 each), and my friend had two glasses of wine (apparently very nice) and a cocktail plus a bottle of sparkling water. We had four dishes and a dessert each and the bill came to around £180 including service.
What I ate:
Crab salad, marinated golden beetroot, apple jelly, Bloody Mary sorbet £10.50
- little fish finger sized row of crab salad on six slices of beetroot with little bloblets of the sorbet, apple jelly and something else on top plus the micro-veg/herbs, very delicate and pretty but not actually much impact.
Jerusalem artichoke velouté, duck ragoût, Lincolnshire field mushrooms on olive toast £8.50
- tiny mushroom with a pate on a crouton slice of toast (very flavourful), a bowl of mushrooms and bits of duck (I think!) with the artichoke veloute (i.e. soup) poured over. Hot and yummy.
Cornish lamb and tongue, salt marsh mutton shepherd’s pie, spring cabbage and mint jelly £13.50
- tiny bit of tongue arranged on a bit of lamb on top of a piece of spring lamb with a little jelly. Lamb was a nice thickness and decent cut. Shepherds pie in a separate pot. Same soupy mash (they'd call this a pomme puree until the new rustic phase came into fashion) poured over mince. M&S seriously does it better.
Scottish red leg partridge, cob-nuts,‘ neeps n tatties’, haggis sauce £13.50
-Pretty little leg, nice nuts (ooh-er...), some weird wrap excuse for neeps and tatties, and haggis sauce which had no haggis flavour. Disappointing. Just like meat with some kind of red wine sauce.
and
Peanut butter and cherry jam sandwich, tonka bean cream and dehydrated cherries £7.50
- A sandwich of nut florentine (no chocolate bondage) and peanut ice cream. A tiny roll of cherry ice cream and gorgeous cherry sauce. A little tonka bean scoop (smooth, slightly savoury) with flat slivers imbedded which I assume is the dehydrated cherries. Yumminess and a lot better than the chocolate delice.
---------------------------------------------------
What my friend ate:
Confit of wild mallard, raspberry gel,
walnuts and compressed celery £11.50
- it's duck.
‘Warm Scottish breakfast’ London-cured salmon, smoked haddock risotto, egg and bacon,
horseradish snow £10.00
- Salmon, with a side ramekin of a very creamy risotto, with a tiny egg and bacon on top. Nice. But not amazing.
Suffolk pork ‘cheek n belly’, spiced pumpkin jam,
red cabbage, crispy crackling £13.50
- just pork belly.
Irish ox ‘tongue n cheek’,caper raisin and ginger carrots, horseradish pomme purée £13.00
- my mum makes similar meat.
and
Bitter chocolate délice, honey gelatine,
honeycomb ice cream £8.00
- rich chocolate mousse with a thin piece of chocolate balanced on top. Ice cream on top of a little crumbled pile of honeycomb. You could see Slug n Lettuce being able to dish this out tbh.
Out of the lot, I would eat, the Jerusalem artichoke velouté, duck ragoût, Lincolnshire field mushrooms on olive toast (was tiny, but a lot of flavour and very yummy) and the peanut butter dish again. The rest wasn't memorable, albeit the shepherds pie was memorable for being pants (no crust and was like a soup) and the haggis sauce was distinct in it's lack of haggis flavour. Must return to Scotland at some point. I don't think I'd go again to Maze. It's worth going to the once I think, but just not my thing.
Have a feeling that I will start paying more for upmarket teas rather than meals out. Maybe go to Roast? It will be disappointing if Toby Carvey tastes better though.
Love n kisses,
Budget Cynic.
Posted by pink-kimono at 18:32 No comments: 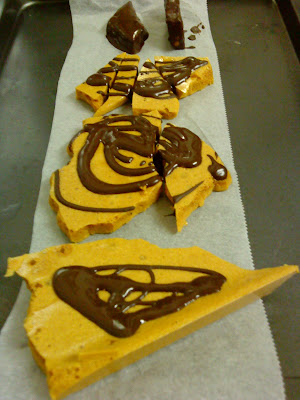 Happy new year all!
Few wee resolutions firstly...
1. Scary - not to buy any new cookbooks APART from those bought on holiday (NY is earmarked)
2. Moisturise.
3. Be frugal.
Most are un-cake related, however frugality links in with non-cake book buying in a way. I bought a shiny little laptop on New Year's Eve and out of guilt feel I must make up for it by making my lunches etc. That is not to say I won't spend, but whilst I am increasing my grown-uppyness by going to places like Maze for dinner (not that expensive based on the a-la-carte) I figure I can compensate elsewhere.
So what have I made this frosty new year?
Honeycomb as above (oddly hard to get the sugar to 160 degrees C but persevere otherwise it fails miserably) I used James Martin's recipe "Cinder Toffee" but you can get recipes which don't call for thermometers or liquid glucose. This will store for a few days as long as you airtight it with at least two wrappings of plastic/foil and don't give it to your dummy brother.
Wreath cake (made with my usual bundt cake from Dorie baked for 45min only, but with peach jam - too much peach jam for such a shallow tin, hence the volcano effect - on eating, don't add the jam, whilst it will cook, the jam merges with the sponge on cooling and creates a marzipanny uncooked effect which I don't like. And it was definitely cooked!!) 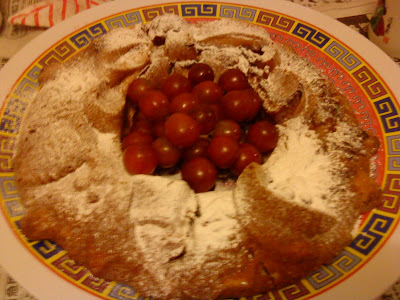