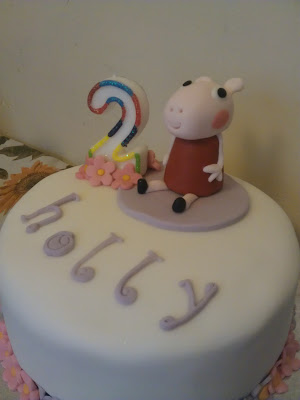 Meet Peppa Pig! I think this might be the one for me. Not perfect, but for a chocolate birthday cake, I think this is the one. The recipe is the "best" chocolate cake recipe which I tried before and didn't like, but tried it again in preparation for this and I thought... "Wow. Okay, this works." I made it in a victoria sandwich tin which at about 6.75 inches? (I don't know... it was in my cupboard!) and takes 45minutes. It tastes like a damp chocolate brownie, complete with the papery top. The only tiny dampener on this is that because it is a brownie essentially, it  doesn't slice so neatly. It does rather crumble a lot. Which is just as well we have that much milk chocolate ganache on it.

Peppa is the second "commission" from my sister-in-law's friends. I say "commission" as in they pay me for my materials so I can afford to play with fondant for fun. With 4 large bars of Galaxy and about 100g of dark going into the ganache (I did double chocolate to cream in fluid ounces - just boil double cream and pour over chopped chocolate - as it's milk you don't even need to break it up much) and 200g dark into the cake itself, you can see that this is not a cake you make for free and probably a hideous idea if you wanted to be profitable. In total I baked... about an hour for the cake and the ganache the night before, and from nine till half one to decorate it. Hypothetically then if I charged a fifty pounds for the cake... I wouldn't make minimum wage and that's BEFORE I deduct tax and costs. Wow. Kudos to pro-cakers out there.

This cake was a testament to the online arena. For Peppa, bow to the walnut whip method. I was actually very tempted to make a George out of the mini walnut whips you can get from Marks and Spencers.
The letters I learnt to do from youtubing tappit advice. Evil little things anyway. 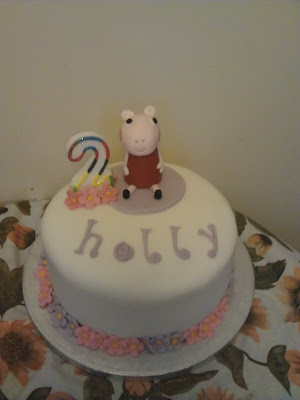 So there you have it. Peppa. She lost an ear enroute but I think she survived the Van Gogh experience to be eaten all the same. Looking forward to another project already!
Posted by pink-kimono at 18:05 1 comment:

Second attempt at using the pro fondant mat. I LOVE the  fondant mat. It is soooo irritation that it is so much more expensive in the UK than it is in the US. However, I have to say, worth every penny.

I bought the super huge version (as why not) and I kind of regret it as you only need about a 14 inch circle for a cake of two layers. Still. You never know, I might make a huge wedding cake one day.

This thing lets you apply fondant beautifully. I'm sure I might have learnt to do it normally but I don't do it enough. Oh. And I learnt. I'm actually willing to eat Tesco's own brand fondant!

The above cake is the cocoa-buttermilk cake from Dorie  Greenspan's book. The third time I've baked it and I hate to say it. It is dry. I give up. Each time. I've rescued it before for applying four layers of ganache inside but I'm not willing to do it this time. I have a Peppa Pig cake for someone soon and I WILL get a good chocolate cake if it kills me. Especially as everyone seems to want chocolate!!!
Posted by pink-kimono at 21:17 No comments: 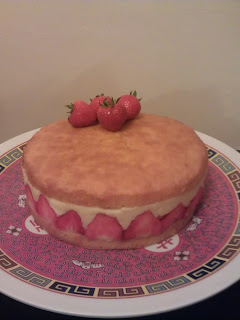 I gave it a go. After following the Great British Bake Off for weeks (and irritating the people at work by reminding them I had to get home to watch it!) I finally made one of the numbers. I've actually made a full list of the bakes and will work through them at some stage but for now, here's the Fraisier. I kept relatively true to the recipe - minus the marzipan because no one likes it. The key things you should know about this cake though is that the sponge becomes very lemony as you add the juice of a lemon to each layer effectively. The other aspect is that the creme patisserie... tastes like wallpaper paste. That is to say, it has a distinct lack of flavour despite me adding a touch of vanilla extract once I realised the pod hadn't made an impact and I just had a feeling it should be more... french? That is Mary Berry I guess. It felt... austere. I crave something silky and French. Like a deep custard tart. Like creme brulee the double cream edition. I was proud of the cake all the same. It looked the part and I'd managed to get the creme patisserie to stay stiff and not collapse like the contestants on the show. I would say acetate is a great tool which I had recently bought. A trick to getting the cake edges right (it's meant to be perfectly even) was to wrap the acetate tighter than the cake tin (which won't fit as obviously the cake shrinks in when it cooks) and to wedge kitchen towel in between the gap. It was quite satisfying.
Posted by pink-kimono at 00:08 1 comment:

It's incredibly frustrating not to remember the email address to this blog, and of course, the password. Hence the incredibly long hiatus. Welcome to 2012! Ho hum. The above is my nephew's SECOND birthday cake. It's the Ninky Nonk from In The Night Garden. Kind of sans a few details, namely because I discovered that     despite a good range of browns, golds and apricot - I somehow did not have any RED food colouring. Primary colour and I don't have it. The red in the above came from those multi-pack of coloured sugar pastes. Also the purple food colouring turned the icing grey-black so I couldn't use it and I ran out of icing sugar! Therefore for me there was a distinct kind of let down. Sigh. The harsh and critical eye of the cake maker. The sponge (just the green ones - the rest are propped up biscuits) was vanilla, filled with some calafate jam. I went to Argentina and we bought some jam - guaranteed to get you back to Patagonia... or so the legend has it. Tastes like blueberry. I managed to get the shape by using two metal bowls to bake the cakes in and then wrapping it in ready roll fondant tinted green. The biscuits are just plain with some royal icing piped on. 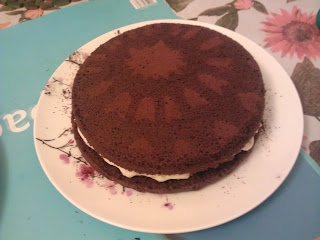 Other cake related things this Summer, Bompas and Parr created a cake themed mini-golf course on the roof of Selfridges which I managed to get to for my birthday. It was a touch badly organised. The lift didn't open dead on opening time, the ticket seller forgot to hand people balls until a few of us went back, not everyone it seems was told that the Gherkin (which swallows up the golfballs) was the last course, and space wise, it was a little cramped for the arrangement. Funny moments had to include watching the Selfridges staff siphon off the water feature around  Tower Bridge as evidently it was about to flood. Not bad entertainment for £6 and we felt very fortunate to get walk-in spots as the booked tickets had sold out. 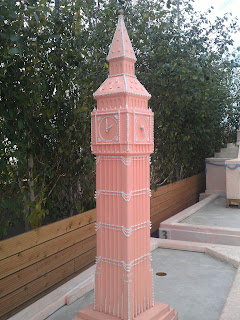 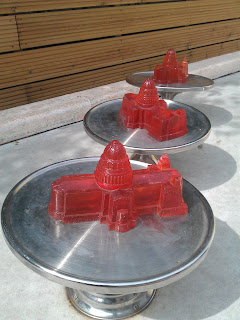 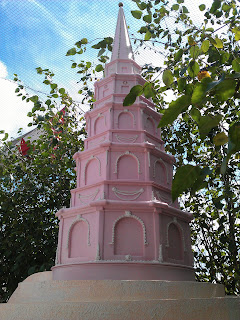 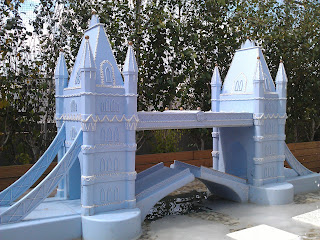 I also finished my birthday with a William Curley tea at the Halkin Hotel. It was 25% off as it was National Afternoon Tea Week during August which meant that it was slightly under £30 each. The sandwiches were unlimited which was good, the tea could be iced (excellent given the weather) and the staff were absolutely lovely and attentive if not up to the standard of a grand name. 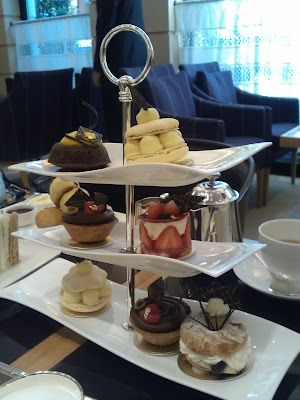 The niggly points:
Verdicts?
The scones were nice, the sandwiches better than normal (salmon and roe, cornfed chicken - better than your usual fare), the cakes - well if you're a fan of Mr Curley as we are, you'll know his stuff very well. The salted caramel chocolate with raspberry is always a winner. I'd say the apricot and ginger macaroon and the cherry brest was excellent too. The strawberry and cream thing was just that... strawberry and creme, and the financier and mango was "alright".  End of the day, if you're paying that much for the name, you expect delivery on every single one. Having been to the Curley establishment in Sloane Square a little too frequently, I'd say you're probably better off just going with a single slice of cake there or having a look at the dessert bar. They also sell the full sized cakes at the Halkin so it's worth noting if you're not in the mood to make the trip, but most of us are not in the neighbourhood of the Halkin either. All in all, a glorious birthday. Let's hope I keep remembering my password before the next one!