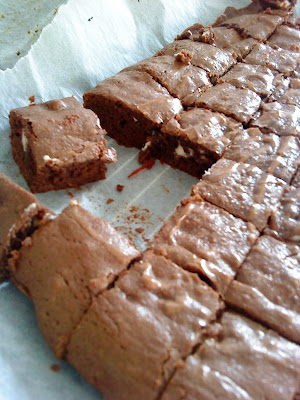 I'm not a major fan of brownies, when you get them from the shops or even Borough Market they tend to be a touch dry, or they fall apart. So with the exception of Nigella Lawson's philadelphia cheese brownies, I rarely make them.
Today I made chilli brownies. The reason being is that there is a spice cupcake competition in town and I was wondering if chocolate chilli cupcakes would work. They probably would but whether that would be against the rules almost. Anyway, I'd already made cupcakes this morning - apple and spice cupcakes which on tasting, were definitely more muffin than cupcake. My fault. Any recipe using oil instead of butter comes out like that. I'll post an apple muffin pic up here, but not the recipe because it wasn't fabulous. You can find others just like it, but whereas I want the spice to meld into the cupcake, it was more like cake, with spice stuff. So back to the drawing board if I'm going to be entering that one (it's a fun competition anyway because you get to taste everyone elses!)
The chilli brownies however, were fantastic. If I say so myself :P They sliced nicely into really diddy squares and weren't overpowering. It was just a nice tingle on the lips that really told you there was chilli in the mix. The original recipe came from Jill Dupleix but I pretty much substituted everything by accident or design. To start with, I made it with dark chocolate. Not even good dark chocolate, bourneville since we had loads left (sister bought by accident when I asked for dark chocolate) and I've been working through the packs by shoving it into premade croissant pastry. It actually tastes pretty damn good in this. If you want to be precise, 100g was decent 70%+ dark chocolate from the baking section in Waitrose, which I found is about 15p cheaper than buying eating chocolate from the chocolate section.
Other changes include the fact that I didn't read properly and melted 300g of chocolate into the butter at the start, rather than saving half to put in the mix as chunks - so I substituted with a packet of white chocolate chunks, which don't look that nice to me. Far from Nigella's imagery of snow, I just think of...*ahem* other less savoury images of which you don't want to think of when eating brownies. Also since I was making dark chocolate rather than white brownies, I figured there's no point in using a green chilli for extra colours. But anyway, the recipe, is as follows. Enjoy!
Chocolate chilli brownies
200g butter
300g dark chocolate (bourneville was actually okay)
3 eggs
100g caster sugar
1 tsp vanilla extract
200g plain flour
1 pack of chocolate chunks/drops
pinch of salt
For the chillies
2 large chillis, sliced and deseeded
100g caster sugar
150ml water
Method
1. Heat the oven to Gas 6
2. Line a roasting tin with parchment paper (no grease necessary)
3. Steep sugar, water and chilli mix on the hob at a light simmer for 5 minutes then turn off and leave.
4. Melt chocolate and butter together and let cool a bit.
5. Mix eggs, sugar and vanilla, and then add the melted chocolate
6. Fold in the sifted flour and salt, then add chocolate drops.
7. Drain chillies and add to the mix.
8. Bake for 20-25minutes until the top is firm although the middle might have some sink when you prod it.
9. Slice into one inch squares and eat from the outside in - the middle is still squidgy ;)
Posted by pink-kimono at 14:53 1 comment:

Bundt Cake... and a Dorie Convert 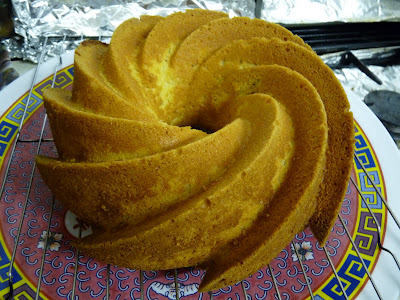 Third time's the charm. I gave in and bought cake-release from the dreaded Lakeland. I love it. But I hate it as well. Love hate Lakeland. So commercial. But so necessary. It never has quite as specialist a gear that I need, but it still has more than the regular high street and more over, I have to go to odd places to get it!! Still, this concoction of hydrogenated fat allowed me to turn out a perfect bundt cake without any digging at all! *pop* cake. The recipe itself also was a winner.
Dorie Greenspan's recipe, I do not believe I've made her before but boy does it rock.
The recipe repeated here so I don't lose the yummy recipe which I did not change for once (although using my usual subs for sugar when I ran out) is as follows:
2 cups flour
1 tsp baking powder
1/2 tsp salt
2 sticks (220g ish) unsalted butter, softened
1 3/4 cups sugar (used 1 golden caster, 3/4 granulated white)
2 large eggs
2 tsp vanilla extract (used one)
1 cup sour cream
3 Tbsp jam, optional
1. Preheat Gas Mark 6.
2. Mix your sugar and butter.
3. Add eggs.
4. Sour cream and vanilla.
5. Add flour slowly.
6. Put half in the pan and blob jam on top.
7. Put rest on top.
8. Smooth over.
9. Bake for 60 minutes until skewer comes out clean. Cool for five minutes or so and turn over. Voila! :D 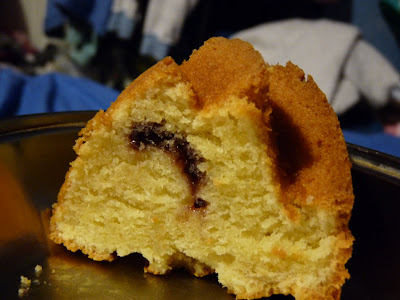