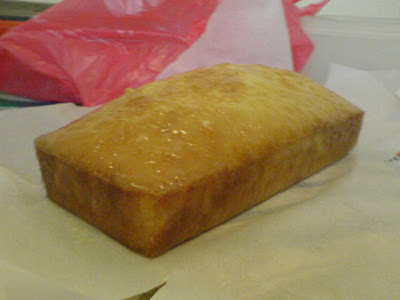 I made this cake after watching Kitchen Secrets and thought WOW that cake is YELLOW!!! Sadly it seems, this was not something to be repeated with mine. Note to self - retune the tv. Anyway, the recipe is here, but oddly the voiceover lady gets it wrong (based on the producer comments) so when the recipe says add zest only to the cake, and she says add the juice, she is wrong. Ho hum. Having made the cake, I'd say ADD THE SODDING JUICE. Without it, it tastes distinctly... eggy. And not of lemon. So after the first mini cake (I split the cake into two batches - one for work and one for a taster for my hard-done-by dad who had to watch me make cheesecake yesterday and waltz off with it to a friends.) I made some adjustments.

1. Stab and drizzle. If you've made lemon cake before, the usual rule is when it's warm from the oven, stab it with a skewer and pour over lemon juice mixed with icing sugar.
2. His recipe calls for an apricot jam layer of glaze. I used lemon curd.

My other comments for this recipe have to be that I find putting it in the oven (post glazing) a little strange. Possibly because to me it seems like it just melted off all the glaze that I spent so long daubing on with a brush. Either way, we'll find out tomorrow if it tastes any good. I'll settle for reactions which are not of the.... hmm, it's interesting....
Posted by pink-kimono at 17:29

Yes, I think that it needs the lemon juice, as well. And it's not just the voice over lady who mentions the juice. Raymond also mentions it when adding the dark rum (something about the rum combining well with the juice?)

I used a 3 fruit marmalade for the glaze and used RB's lemon zest, juice and icing sugar recipe, but also served it with a dab of lemon curd.