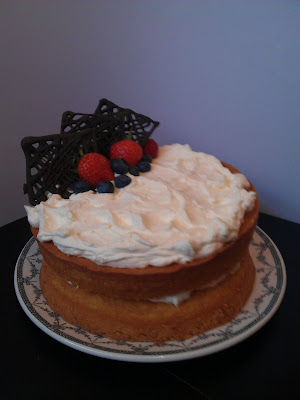 This lady made a cake at work and it tasted amazing. I asked for the recipe and I was surprised to hear it was Nigella's Victoria Sponge from How to be a Domestic Goddess. I very rarely make anything from Nigella's cake book any more and never this sponge. Probably because it was a Victoria Sponge as well, for which I've used the Good Housekeeping book that my mum has had since the 80s. I think I messed up the temperature somewhat as it didn't taste as good though :( Just slightly tighter somehow.
As it was Father's Day today I made it for him. Just cream, minimal fruit decorations etc. Parental approval all round.
I've been messing with chocolate lately and that's why it's got some leftover chocolate squiggle squares on top.
The other little chocolate number I made was the below for my sister's colleague's birthday. They had a £5 kitty for a cake so I figured I'd experiment so she might get something nicer than a standard M&S tray bake.
It was a standard Sky High vanilla buttermilk cake with buttercream in between, but I doodled melted white and dark chocolate on a bit of parchment first and wrapped it round a cake tin before letting it chill . 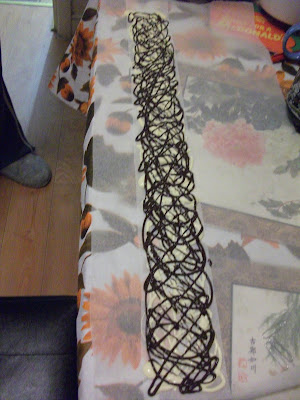 It was a very lucky thing it did come loose from the tin. The impressive thing was how bendy it was still. In fact the ends didn't join properly and I could use it as a cuff bracelet almost. So I cuffed the cake effectively. 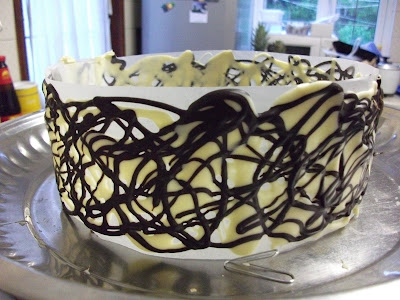 Added a few words piped in dark chocolate on parchment paper (again peeled off) and then we were done. Nothing fancy, no fruit (I wasn't exactly hitting a £5 but I didn't want to go OTT in funding this girl I've never met's birthday.)

Happy birthday to the random girl out there in the universe. 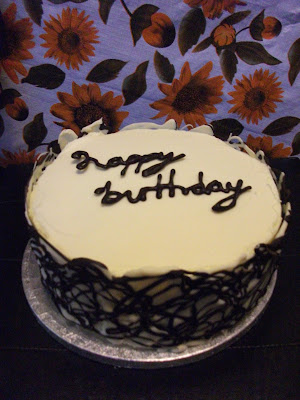