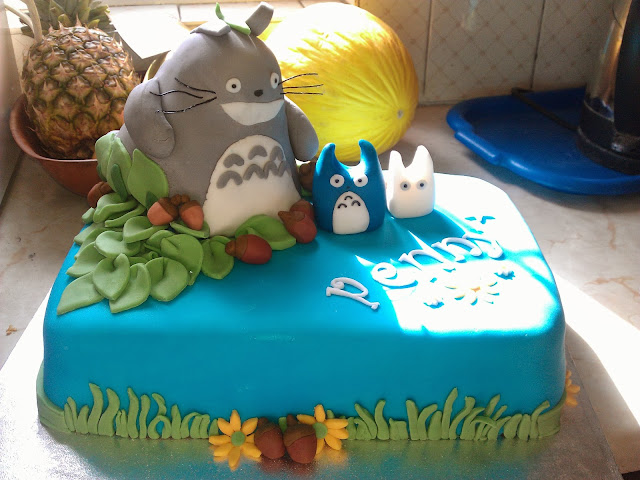 I made one attempt at finessing the chocolate cake, but with no melted chocolate and 50g less cocoa (replaced with flour) it STILL tasted super rich. So when we found out the cake was to serve 40 we figured super rich was fine. Tiny slices, super rich... it all works.

So recipe wise, we used the recipe below but made two batches worth in a roasting tin. I actually carried my nice flat based roasting tin home from my house to my mum's to make it. Anyway, it was fairly standard, left it in for about 5-10 minutes more and it was baked through. The only problem is the edges are slightly more crumbly than normal (but that might have something to do with adding twice the required baking powder to one batch because I forgot whether I had added it or not! 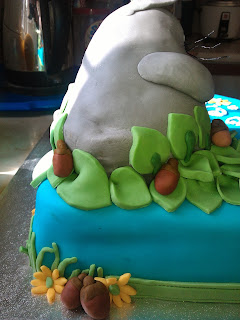 The Totoro is made of rice krispies and melted marshmallows with a bit of butter. Coated in a little ganache, the icing went over the top. Can I say, this was the BANE of my night. It's the reason that having started baking at 5pm, why at 1.30 am in the morning I was swearing because I had bought black gel colour at the supermarket (figuring I probably wouldn't use it enough to buy paste) and basically gel makes the fondant a little bit too soft and thin and as a result, it rips when you put it over the rice krispies. A shedload of icing sugar after, the colour was lighter, but it fit on top. The only problem was that now with multi-odd patches of icing, my Totoro was no longer Totoro shaped - so I went to bed. It really is the only sensible thing to do. It really did look like a wrinkly giant pyramid. 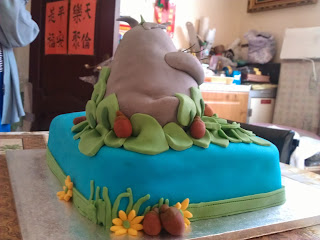 Anyway, come morning, I made the executive decision to carve most of the base off to make it a proportional size and then start the cover up job. I swear all fondant cakes are so original because they are the mother of all cover-up jobs. I covered, and covered with leaves. Kept patching and covering, made some new things and ultimately, I think it worked out well. I LOVE the little white one, especially in the kitchen window light because it actually looks translucent like the real one!! :)

I got a slice back with my nephew and it tasted okay. Apparently it was a bit difficult to slice at the party because it crumbled but I think that was because it was sliced so small as the one we sliced at home was fine. Is this cake the best to date? I don't know. I definitely know that on the day I was thinking this is why I make novelty cakes for fun only - i.e. the fact it is so demanding and tiring means that I shouldn't make this into a profession. But at the same time, when I was compiling my pictures, I couldn't help but feel a little proud. If I wasn't studying, then I would have had another commission for this month on the back of this so that was sweet, but hey. Got to pass! Here are the pics, warts and all! xx
Posted by pink-kimono at 20:29