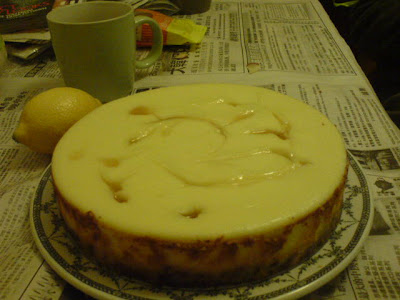 Not to sex up dessert... no, not at all. But I've always had... earth moving experiences with food. It has been noticed that I seem to inadvertantly *mmmmmm* when I eat certain foods I find appealing. Gu chocolate molten middle puddings - those ones you put in the microwave for a minute, and oddly enough Scottish Oat cakes really do it for me.

Anyway today it was all about the cheesecake. I should have gone to the gym and watched a film at the cinema since it wasn't rainy, but instead me, mum and sis hit the local Waitrose for a shopping trip. Came back with the makings of cheesecake because after last year, year of the gingerbread house, this year is for cheesecake. It's a competitive thing. I think I must have mentioned. If not, here it is again, the ladies who bake are competitive. The chinese chiffon cake is the main item of choice, however my great-aunt has recently discovered the joy of cheesecake and orders it if they go to cafes. They don't know how to make one. I do. Hence since her daughter-in-law now makes gingerbread (copycat) I need to up my game and make cheesecake to allow mum bragging rights. Sorry, not bragging rights (we are talking about a daughter in law who is terminally ill and all, but competitive baking holds no prisoners). It's not bragging rights, it's "oh, well my daughter made this, oh she's so lazy, she can't bake at all, but just try this..."

So that's the backstory. Nevermind I'm not actually a fan of cheesecake, but hey. It's just life - I love raspberries, none of my family do. Hence there's a problem finding people to eat my food that I like to make. Regardless, the "family" favourite is to buy the lemon cheesecake from M&S or Tescos. Personally I liked the apple muffin cheesecake I bought once at Sainsburies (it was on sale!) Either way, it means I'm having to perfect a recipe for something I don't ACTUALLY really like.

However, today I made the cheesecake. It came from GoodFood, with a few adjustments... like no raspberries, a deeper dish, lemon curd, ginger nuts rather than digestives... is it even the same cake??!! Still, one baked and the middle was molten and you are supposed to let it cool and set, but... it's our family. We like things hot. No one ever serves cheesecake hot. Or even warm. It's wrong isn't it? Well I sliced. I spooned the liquid middle with the swirls of lemon curd and oooooohhhhhhh.... It has a sexy warm liquid feeling. Like....the melting middle puddings. Like a warm version of a particularly voluptuous trifle... oh that's a thought... But anyway we sat there spooning this rather delectable cheesecake and drifting nicely into a lemon buttery cloud. Mmmm. *Sigh* time to shake the pictures out of my mobile. Enjoy. 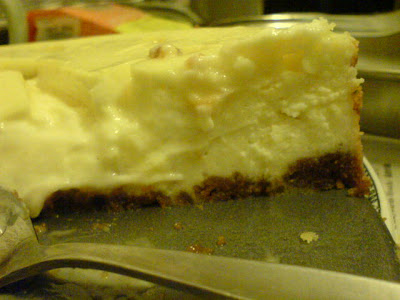 Method to my madness:
1. Bash ginger nuts and stir with melted butter.
2. Smush into the base of a loose-bottomed tin. Think mine was 9 inches.
3. Bake briefly (less than five minutes) at Gas Mark 5.
4. Beat cream cheese, sugar, flour, eggs, yolk, sour cream and vanilla together.
5. Pour onto biscuit base.
6. Drop small drizzles or teaspoons of lemon curd artistically on cheesecake.
7. Drag knife through to make funky patterns.
8. Bake for 50 minutes until edges come away very slightly, middle is molten and wobbly.
9. Turn off oven and leave in there until the middle solidifies a bit more.
10. Just eat it warm regardless. It's... yummy.
Posted by pink-kimono at 20:54