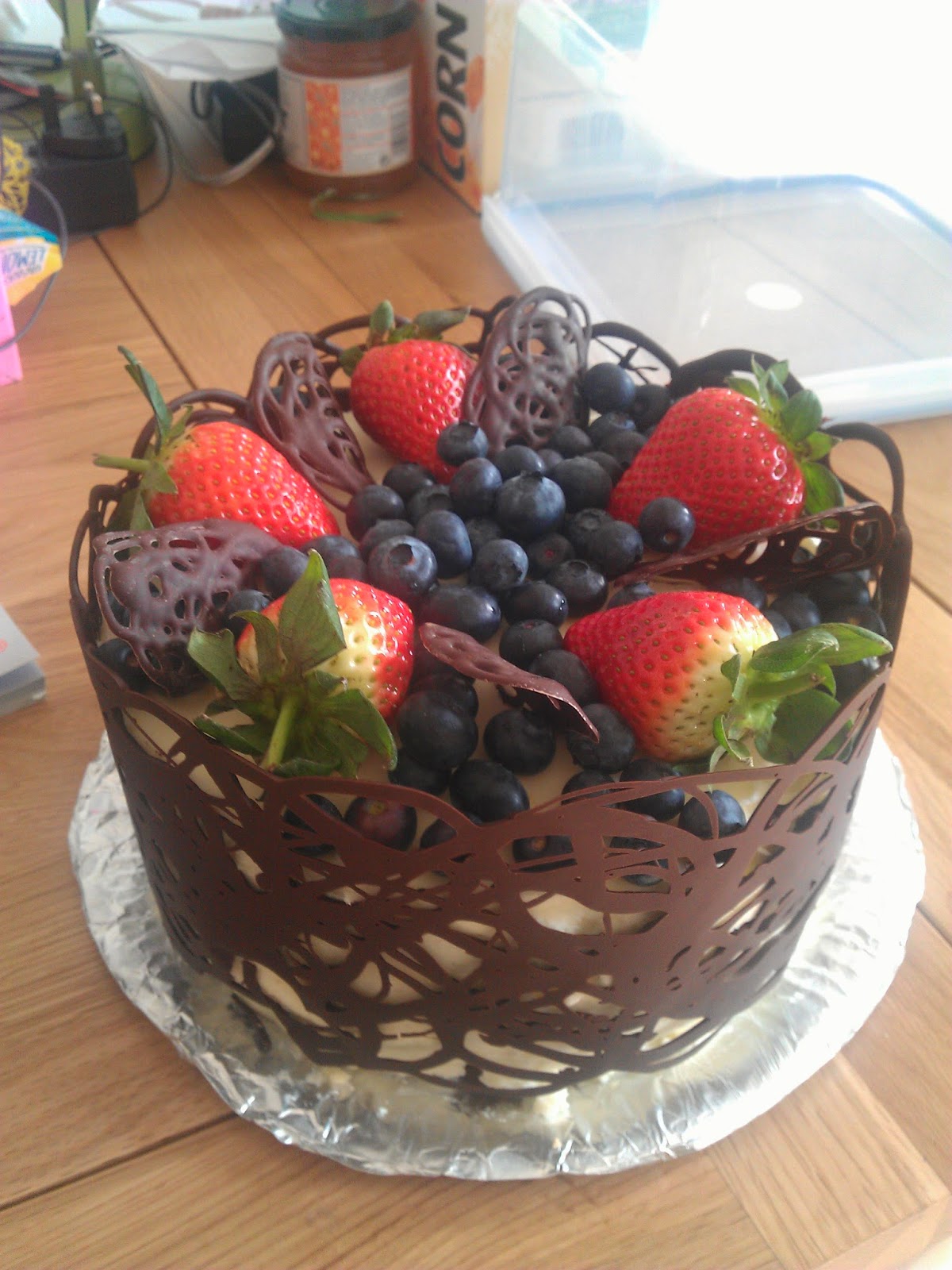 I've made chocolate cage cakes before, but never brilliantly. In fairness, this isn't brilliant but it did get a lot of attention.

The whole process is very, very simple and is very handy for covering up the less than brilliant buttercream smoothing I do on the sides. Did I mention I hate buttercream? Gets sugar everywhere, dries hard and is far, far too sweet. I did  try a cooked flour frosting the week before but my friend complained it wasn't sweet enough. Anyway, let's talk chocolate cage.

You have a cake which you've covered with some kind of frosting. Assuming your oven doesn't suck as badly as my current one which messed up even the simple victoria sponge inside this cake, you'll have a cake. By itself, that's fine.

To the cage - measure around the cake - and do it AFTER you've frosted it. I did this based on the cake pan and ended up about an inch short. (FYI not an issue, just squiggle some chocolate on a spare bit and patch it in the gap. But anyway, to measure it, grab some parchment paper with a straight edge at the bottom and wrap around the cake lightly. You can find another way but this works fine.

Either scrape whatever buttercream stuck to the parchment paper off or flip over and use the other side.

Take some melted chocolate (microwave/bain marie or just badly melted on a hob at your own risk) and put it in a piping bag or sandwich bag with a small hole cut in it. Now you can make a paper piping bag but I tend to get chocolate leak out of the top more. The sandwich bag route seems to waste more chocolate and the piping bag... well they're expensive.

Note - I use dark chocolate usually but white and milk have worked before. The knack to this I've found is don't pipe it when the chocolate has just melted. If you use it whilst it's super hot it tends to be very loose and hard to pipe accurately because the oils are just all over the place and liable to separate. If you get it a couple of minutes after it's melted (and not scalding) it's quite good.

So to piping it, either go randomly like I did in the picture or follow a pattern (you can draw on some paper and trace it through the parchment paper). Decide if you want to have the collar come at the same level as the cake or above the collar, it's really up to you.

Anyway, once you've piped it, wait. Just wait. You want the chocolate to lose the shine a bit and not look like it will drip when you lift the paper. If it sets too hard it cracks just warm it slightly in a low oven.  Once you think it's the right moment, lift it up and wrap it around the cake. It's a lot easier to do from one edge of the paper and then wrap the rest round but go slow as you cannot re-wrap it. It will smudge if you do that.

Anyway, once it's on, either shove it in the fridge for a bit or just leave it out to set. Five to fifteen minutes works well, depends on the weather. Peel the paper off and then you're done! Stand back, bask in the glory and a bunch of people going "WOW HOW DID YOU DO THAT??!!" Well.. google :) 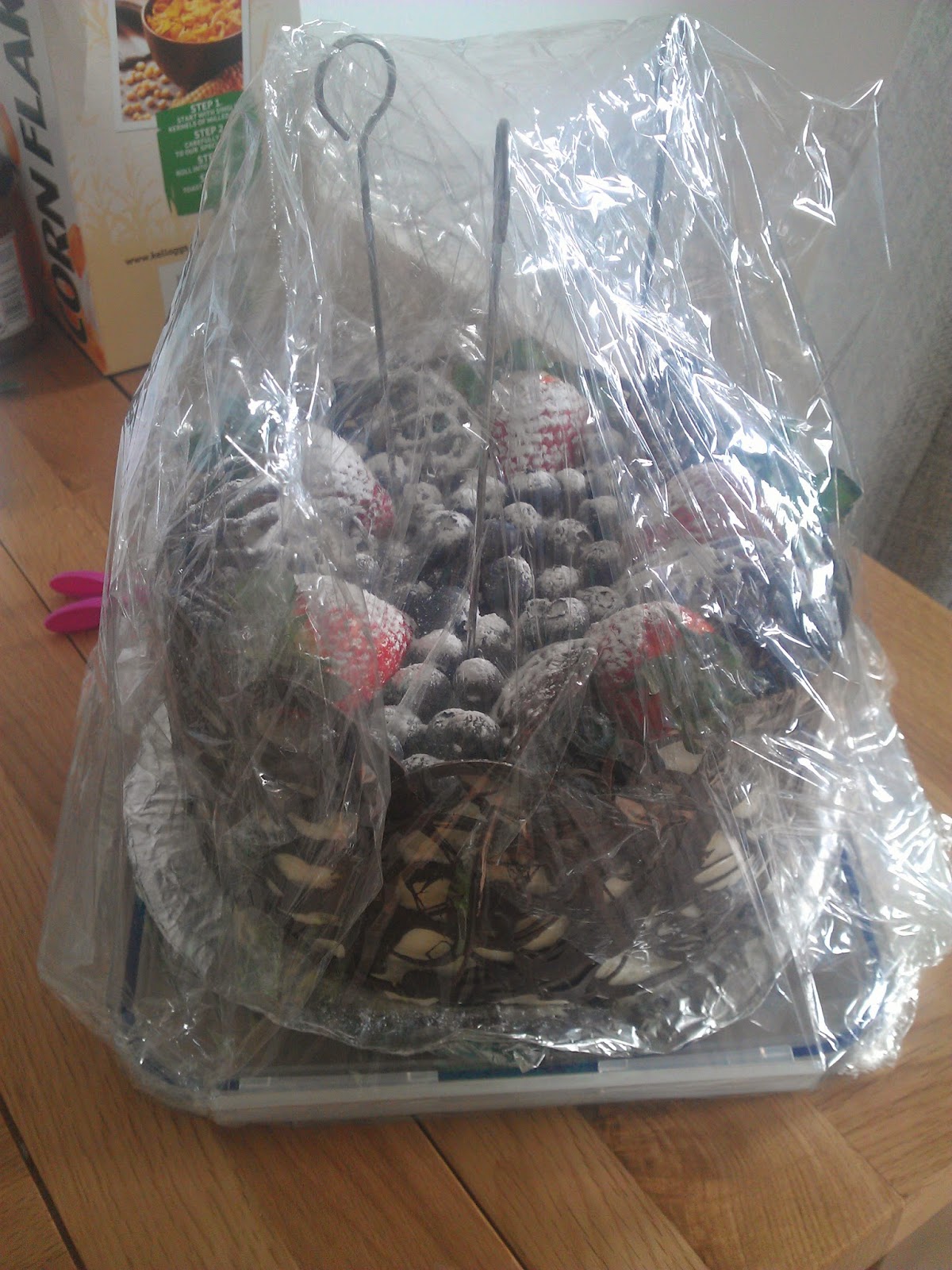