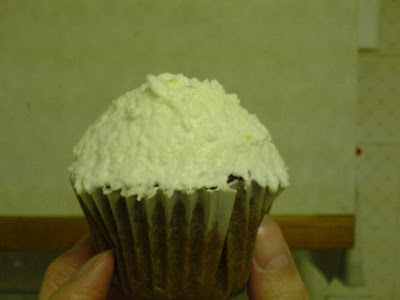 What else can I say? I've been a busy baker recently. Namely because I've been hugely antisocial of late, slight toothache and just generally sick of it all. So for the first time in ages I've been spending large amounts of time in bed curled up and so to be productive I've been baking a bit.

Coconut cupcakes (which neglect to mention the chocolate factor)

Preheat the oven to 180 degrees and line a 12 hole muffin tray with paper cases. Cream together the butter and sugar in the large bowl until pale and light. Add beaten eggs and mix well. Add cocoa powder and coconut.

Mix together theflour and baking powder and fold it to the butter-egg mixture, and mix until smooth. Divide between the paper cases and bake on the middle shelf of the oven for 30 minutes until the cakes are golden and toothpick inserted comes out clean. Remove from the oven and allow to cool.

To make the frosting, mix the mascarpone, icing sugar and lemon zest until smooth. Add coconut. When ready, spread an even layer of the mascapone mixture over the top of each cake and sprinkle with coconut.

I can't remember where I nicked the recipe (they used lime but we have lemons so tough) but it's not something I'd make again although the sponge was delicately soft.