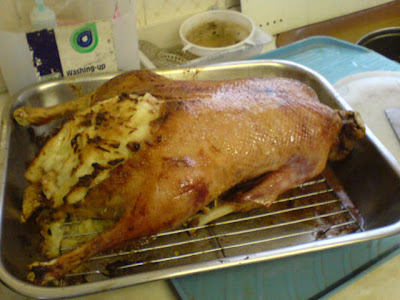 I'm in a petulent mood. Hmm maybe that's the polite way of putting it. Right now, I want to whip raw potatoes at the wooden fence outside. If I had superpowers and could throw fireballs I'd be in trouble right now. All in all, not feeling too Christmassy. Usually I'm really into the cooking. My only opportunity to cook the main. But I made goose last week (£19.99 at Lidl) and I suppose that might have killed my urge. I was banned from cooking goose for Xmas because it's too fatty, too expensive, may as well get duck... and when I bought it the parentals got all excited because it's not that pricy, it's huge and quite tasty.

I followed Nigella's Feast to a certain extent. Stuffed it with mashed potato but also some apple wedges which did not go down too well. I also learnt that geese have some large greasy valves near the bum which require squeezing or cutting off. (Icky, but less icky than what I thought it was.) 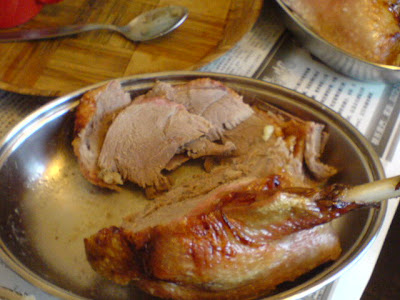