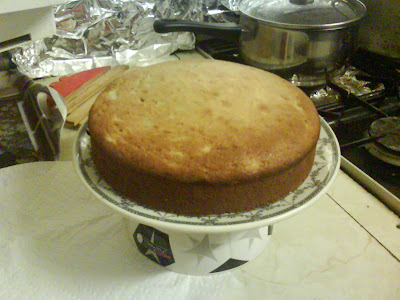 It's that time... yes I need to use the slightly out of date leftover stuff from the weekend. The glup of buttermilk and the sour cream. Unfortunately there is still a half cup of sour cream I have to find a use for, but! To the Banana Cake Batman!

The recipe is from Betty Crocker, free application on the ipod touch. It's one of those pigging annoying recipe books where 99% of the recipes use a mix created by... Betty Crocker!! However, it has a recipe search where I looked up buttermilk and so, made banana cake. If you are doing this, one assumes you'd actually have buttermilk. I used my glup and made the difference up with sour cream. Please note that Frau Crocker also grossly underestimates the baking time. Mine took an hour or more using a 9 inch pan? Don't let it put you off though (apart from the gas bill I guess) because putting the cake itself together took less than ten minutes. I admit though, I had my brother mash the bananas for me, and being my brother he chose to do it with my potato masher. *sigh* 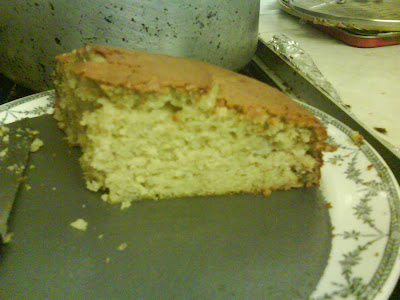 Method:
1. Cream margarine and sugar.
2. Add eggs and vanilla.
3. Add dried goods and buttermilk alternately.
4. Stir bananas through.
5. Bake for 1 hour at Gas 5 in a lightly greased tin (I did half an hour at 6 and then a further half at 4)

It does have a nice crust to it, and is deliciously moist. Not sure whether it will just be damp by tomorrow, but next time I fancy adding some fat golden sultanas to the mix. Must learn to separate the sections so I get sultanas in one side and chocolate chunks in the other since sultanas are on the list of non-sister friendly!
Posted by pink-kimono at 21:32