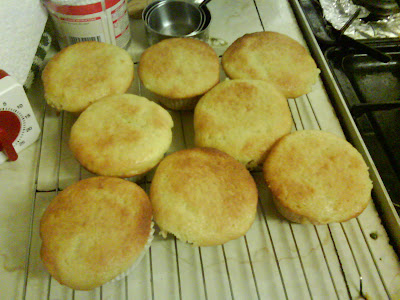 Buttermilk cupcakes. It's my fault. Trains were awful this morning so I turned myself round at the station and asked for the day off as holiday. In my quest to bake I bought buttermilk and sour cream because all my recipes call for that? Right? Wrong. Why is it that all those recipes suddenly disappear? So I looked online and found a recipe for buttermilk cake. Which I made into little cupcakes because I cba to grease a pan and because my cousin said to . 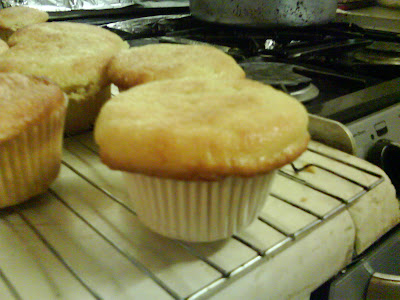 They came out very flat - expected really since the recipe has an insane demand for self-raising AND added raising agents, must have been compensating for something. But they were delightfully flat and flooded the pan in pretty way. Mum preferred them to my usual cupcakes because they were more moist and looser in crumb. Well she would have said that if there was a direct chinese translation but that's basically the gist of it. After giving her the recipe, she asked what buttermilk was... and proceeded to enquire if she could use milk. Cream? Evaporated milk? She doesn't really go for things in the chiller like I do. Makes sense really - I now have an annoying glup which I will have to make scones with.

I also decided to make a small amount of frosting using a glup of sour cream (the rest of the pot will make a batch of my standard cupcakes). Remind me to stop doing this. I don't actually like sour cream frosting, but every time it calls because it is so easy to make. Actually I think it's mainly the plain chocolate effect I hate but either way, MUST STOP.

Recipe for sour cream frosting which I used on two cupcakes:
4oz chocolate (100g or half a pack of the big bars)
1/2 cup of sour cream (glup, glup)

Okay I missed a step. Although it was optional! I bought some coffee granules today. I don't drink coffee other than the sugar and cream high frappa-chi-chi latte what have you's from Starbucks. So it was a task. I picked the smallest jar that wasn't Nescafe and lo - it was this slightly fancy hazelnut one that I picked. Alternatives were french vanilla or swiss chocolate. Interesting! I've had a cup now and it's not half bad, but no point getting into a caffeine addiction when I already do a nice cuppa tea. Anyway I got them for purposes of all these cute coffee biscuit recipes I have, but for the purposes of today I dissolved a teaspoon in a teaspoon of water, added to the sour cream before I stirred it all into the chocolate. Can't say I really tasted it, but then it might be why I had to add some sugar at the end because the plain chocolate is REALLY plainnnnnnnn. Will never understand why it is THE cooking chocolate when milk tastes so much better but hey. Maybe I should just rebel. 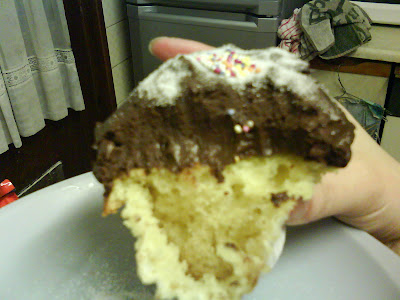 That's a picture of the cupcake innards. I also bought some sprinkles today and so decorated with some granulated sugar and a little coloured E numbered topping. Appetising aren't I? Oh well, little in moderation. Had some Hummingbird bakery cupcakes yesterday. Not great great in my opinion. The red velvet wasn't half bad last week, but the chocolate is just light chocolate with definitely a better frosting than what I achieved today. What I did find wow was the ingenuity. I've never frosted cupcakes much namely because if you are travelling with cupcakes its hard to keep them intact. But some of the chocolate cupcakes from hummingbird were coated in chocolate vermicelli. Making a nice, neat, protective cover of chocolate over the frosting. Gotta try it! 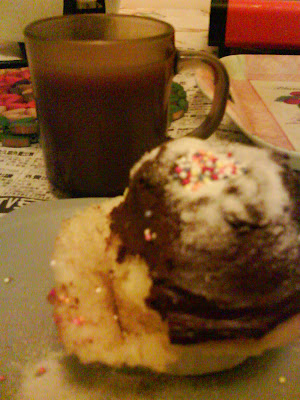