And they call me mellow yellow...

Remember the Gap advert?? Well it's better than the other things mellow yellow remind me of.

I'd like to say, I LiKE myself. Now I don't want this to turn into some gratuitous blog of my life's comings and goings, which, I must say, I've indulged in before in my life. What happened to the days of writing in secret diaries? Being affronted by invasion of privacy, whereas, these days we just post it all out there...

Now, back to why I like myself. I could be a little slimmer, a little smarter, a little nicer... but sitting here on my day off, looking at blue sky, getting a bit narked off by my auntie who is ridiculously loud downstairs and disturbing my baking schedule, I like myself. Why? I think I've lost track a little. Well. I like baking. I like taking pictures of them and saying "Look at me, look at me" (10 things I hate about you). I am, even looking to spend some money on a camera, just so I can do that, that bit better. (Blame the food blogs, all you people with 10mgpixel cameras!) But you know what? I've not fallen into the mummy trap. My mum has her signature cake. The chiffon cake. If anyone bakes it better, I think she would fall into a depression slash killing spree type mood. I accept that I am not the best. You only have to look at some of the blogs out there to know and likewise, I don't make baking my identity. It's part of me, but not all of me. So I like me.

But here it is, the source of my weird self-awareness day. The Comic Relief bake sale. I didn't make anything, I went out the night before, plus the fact I am a little cake-shy to be honest. The first few times I did check out the Hummingbird bakery cupcakes. 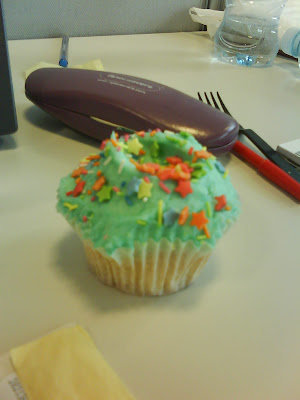 They weren't that hot, but they weren't bad. The red velvet featured fluffy icing, the chocolate cake a little light and boring, but it worked. The vanilla, iced in a tasteful neon blue, was a little stodgy and BLEUGH in icing but hey, it's all for CHARRRRRRIDEEEEEEEEEEE. But then the next day, there was an actual home made bakesale. And the woman (from finance no less) turned out a large table of baked goodies, of which I forked over £2 for a tiny carrot cupcake. 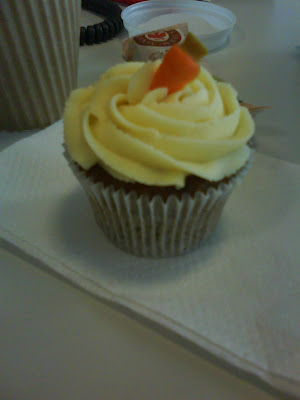 Oh that cupcake made me surprisingly heady. I can make carrot cake. It's alright. Last time I made them I didn't frost and they were designed to be muffins. But this? The cupcake was light and spiced. Moistened with the little sultana bits. The top was perfect. AND PIPED. With a tiny white chocolate carrot on top. *sigh* I emailed her for the recipe and to commend her on such an amazing feat. Cake envy of the highest degree. Check out the pictures. Hummingbird doesn't come out too great... that's all I can say!
Posted by pink-kimono at 14:35