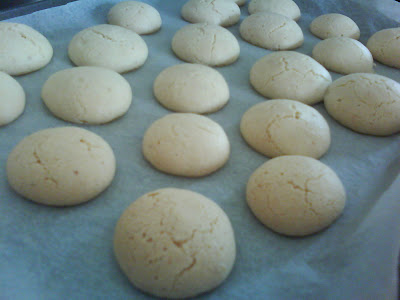 I made these insanely early, but here is my schedule:

4th May the Cookie Carnival email came out from Kate, this weekend I made them, next weekend I'm in Scotland, that gives me two weekends left. Yeah, looking at that, now I have no idea why I thought I HAD to make them this weekend (10th) :S I'll figure out what I HAVE to do in May soon. Probably some hen-do or wedding for someone I've forgotten. Ouch.

I've always struggled with macaroons. I've made them... twice. Once using the Roux brother's book, once from the wonderful Tartlette blog (see right). Both failed miserably. The first one was edible. It probably wasn't a good idea to try and use teaspoons which they SAID was okay, the second time I tried to risk it with greaseproof and naturally everything stuck everywhere. They also make scarily little so by the time you've peeled them off the tray, you've eaten most of them. This recipe made a shed-load. There's pictures of the macaroons on every surface, but I think you'll get it from the following picture - and that is AFTER me and my sister worked our way through the ugly ones! 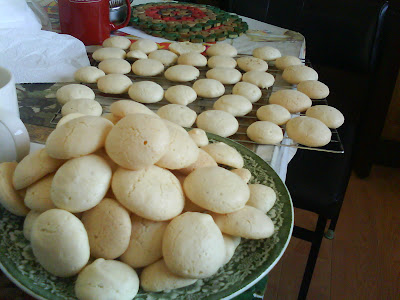 So today's recipe is from Williams-Sonoma. Which I gather is a US version of a cookery store like Lakeland only a bit more flash. And it was with a great deal of apprehension that I embarked on making these. I wouldn't say it was a successful macaroon, not in the way that La Duree macaroons are, with delicate little feet and flat tops. Mine were more along the lines of almond macaroons slash meringues with a nice nutty flavour.

There are things in both the Roux books and in Tartlette's blog that I believe might make a difference - firstly Tartlette ages her egg whites, and the Roux brothers use the high heat then switch ovens/leave the door ajar after the initial period approach. Both might be interesting, but quite frankly, these were lovely anyway. I'll spare you the chocolate ganache, namely because I thought the jar in the cupboard would work, but apparently after donkey's years it's finally decided to grow some mould. Instead I've applied a little peanut butter and some lemon curd to some for the pics but they were pretty de-lovely to begin with. Scratch that, just ate one with peanut butter. WOOT WOOT!!!

The hazelnut came through which was brilliant - namely because I could only find one packet of hazelnut in the shops and I used a mini-chopper to "grind" it. I did force it through a sieve before using and the stuff that didn't make it through, I made up the difference with a pile of ground almonds from a pack.

Overall a wonderful experience this time around, and I sincerely doubt the trays of macaroons will survive the evening let alone till I get home from Scotland next week!!

BRING ON THE NEXT CHALLENGE!! 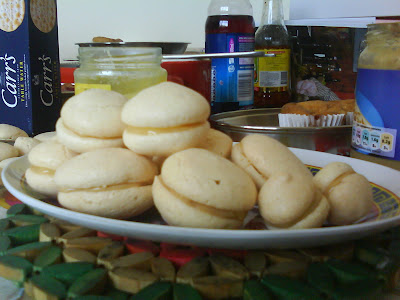 I'm surfing around at everyone's challenge. They look great! You had a lot of nice ones turn out! I had issues too.

I also thought the cookies alone without the ganache would make a great treat... perhaps using a cookie press for greater decorated edges.

Great job! I had fun making these and subbed the filling with a home made hazelnut chocolate spread. SO GOOD!

Yum...hazelnut and lemon!! That sounds like a great combo to me.