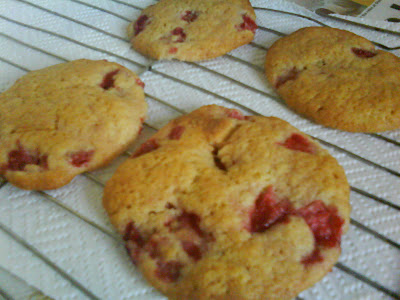 Here we go. Early as usual, but these few weeks are manic and since I had to be home to sort out my expenses and the state of my room, why not bake at the same time? Here in lies Martha Stewart's rendition of Strawberries and Cream in cookie form. The recipe is remarkably easy, just make a crumble and add cream to it and then the fruit. In essence it's not bad, but makes it feel more fattening because you're tipping in a load of cream to boot.

The recipe is here, but I made a few changes. One, I added a tablespoon of lemon juice because I didn't read it before I chucked it in (and I cba to drain it off either). Two, there's no sanding sugar because I don't own any. Three, I added a slug of vanilla to the mix because I could. All in all, a very nice cookie, especially fresh from the oven. But after that I think it lacks a certain punch, even with the lemon juice. Maybe I should have considered adding black pepper or balsamic? Those tend to add some tang to the mix, however even as is, I reckon these are going to be well received although I might have some difficulty transporting them as they are distinctly floppy with strawberries unless I toast them crisp.

I also made some mini-muffins from the mix (no difference, just in the cases). This was because I couldn't be bothered to use another baking sheet and just plonked them in. Very cute and because they're small, they'll get eaten. Dangerous! 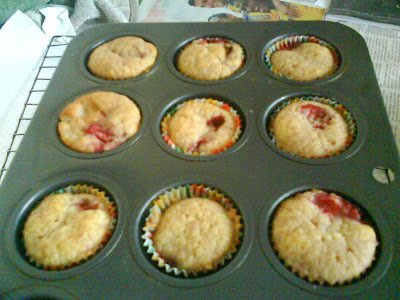 What a fantastic idea to have made the mini muffins.