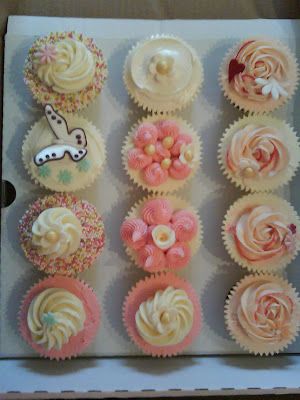 So I forked out some hard-earned cash this Friday (well, less forked out, more electronic transferred and therefore it didn't feel like I paid anything at all... dangerous that!) to go to a buttercream class. The lady in question is of Faircakes. She's been in business for about a year and has quite a following on facebook and twitter (which I don't use). Anyhow, in an effort to get some me time, and just blowing stuff on something "for me" I went along.

It was a small class (just two students including me) and it was pretty damn interesting. Firstly, she's from the same university as me, and evidently experienced the hideous office politics barricade and left the rat race for the baking tray. Interestingly enough she's not a lover of cake. It is to her, a business, which makes a lot of sense to an LSE girl like me as well. Whilst I love, love cake, I'd be reluctant to lose my tastebuds in an "Eat, Drink, Man, Woman" sense. If you didn't love it to begin with, well that's probably okay, because you might end up hating it. My school of thought is more Nigel Slater, live it, breathe it to the point of lovers lost and spurned (a date who doesn't like cake?? If he doesn't at least hold a spoon and pretend to share mine I'd see issues...)

Anyway, back to the class. I went because it was of a level that suited me. I don't pipe stuff. I've never piped stuff save the icing gun debacle which a friend told me resembled one of his tissues (don't ask) and I guess the macaroons which are less piping, more dripping decoratively. It was unfortunate in essence that there was very little actual piping time, however the smushing of buttercream of airbubbles and filling the piping bag will probably make more difference to future piping than what practice I could get in there.

What was interesting was the other lady who was there, she was basically practically using Faircakes as a franchise. Wanted the EXACT recipes, the EXACT tin measurements, and I was kind of (in a way) laughing because here was a woman who was making cakes, selling them, and quite frankly doing it at a loss. Like, BASIC spreadsheets, costs vs pricing. It's the business nerd in me that I take for granted. You wonder why people go out of business. Actually it makes me wonder why I don't go into business. I can bake. I know better than to pay for a stall in Oxford St markets (Borough, Kings, Portabello - the price might be more expensive but here is where people will linger for food purposes.) *shrugs* And here was the interesting thing. The lady taking notes, she didn't seem to twig that her idol (the teacher) was trying to get OUT of baking cupcakes and into classes because the profit and time allocation was better. If it didn't suit her as a business model, for someone who has finally established herself (thanks to Facebook, twitter and the internet revolution!) why copy it? Not my problem, I was there to make cakes look pretty.

Anyway, the above is basically what I made, the flowers and stampy things are what the lady teacher made - I did like that trick, can't make the piping look good? That's fine, cover it with a flower or something. She was literally the Delia's Cheat guide to cupcakes. Two things she did miss out on which I could have suggested as a net nerd/cake addict
- chiffon cake
- scooping batter in with ice cream scoops
Will post some more later.
Posted by pink-kimono at 13:01