Chocolate tea at the London Hilton 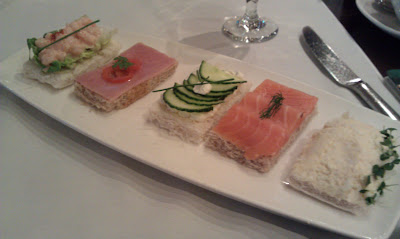 You have to love January sales. But as it's me, I hit the 25% off deal online for the London Hilton Chocolate Tea on Park Lane. Which, on the date that I went was a bit of a horror. I must explain - Park Lane is just near Hyde Park. Where the students were having their protests that day. And the President of Bangladesh was staying at the Hilton as well so there was some protesters outside the hotel specifically for that too.
It gave us a rather odd feel of Marie Antoinette in a way. "Let them eat cake." We were also very grateful not to be sitting near the windows.
The service/protocol at the restaurant was mixed. They offered to switch the sandwiches if we wanted to, were generally lovely and doggy bags come as standard. When I say doggy bags, I mean hopelessly elegant pink cardboard and glossy carryouts. I'm saving it to carry my own cakes later. The bad side was that it's not a place where they pour the tea for you, but also that you feel a little pressured to stick to the same tea whereas usually I switch between each pot, plus it wasn't even a tea refresh, it was just new water. There was a keyboard player who sang up to date songs. Unfortunately a little loud because I suppose she was trying to drown out the protests, but it made conversation a bit difficult. She did manage to sing Happy Birthday at least five times whilst we were there so if you're into that, make a request! 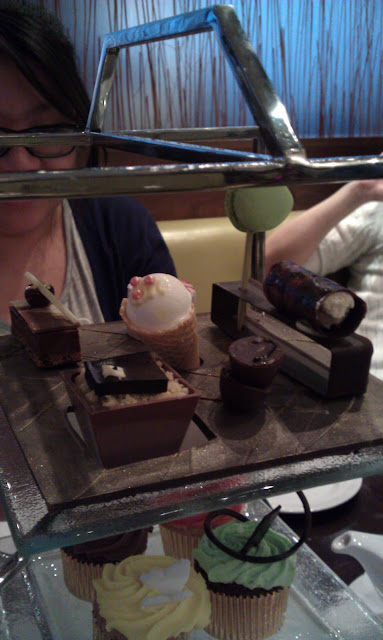 The important bits. The chocolate plate. It actually comes ON a chocolate plate. The selection changes periodically. My sister in law went a few weeks earlier and had a different set of cakes. The one we had were as below - work from the top middle in an anticlockwise direction, the lychee mousse is covered in the picture by the marshmallow cone.

Lychee, raspberry, rose water mousse, sugared diamonds (fluff with a bit of raspberry, strawberry flavour. Low on flavour and I hate sugared diamonds I've now decided. Like silver dragees, rock hard and non-biteable.)Chocolate mille feuille with Griottine cherries (voted good but no one liked the cherries)Pineapple crumble with chocolate jelly (okay, but not great)Jaffa cake chocolates (not good)Cone of marshmallow and chocolate ganache (slightly rubbery for me, but a cone of chocolate is never bad)Caramel of white chocolate and praline (the brandy snap looking thing at the top)Pistachio and chocolate macaroon (green lollipop on a stick) 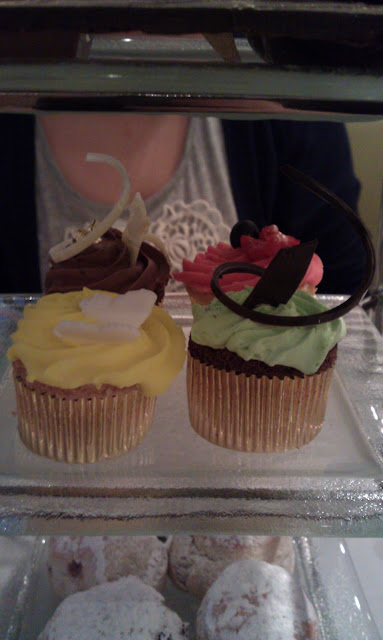 The cupcakes. They were, lemon, strawberry, chocolate and peppermint. I only ate the peppermint and it just tasted of buttercream and dry chocolate cupcake. They also od'ed on the sparkles and baubles which meant I had to spit bits out - so elegant I know! The rest of the cupcakes I sent home with my friend. Odd for a tea place, they only had one of everything (apart from the jaffa chocolates and the scones). Usually it's one each for everyone. I also felt a bit bad because I had heard such good reviews about the coffee cupcake they had. 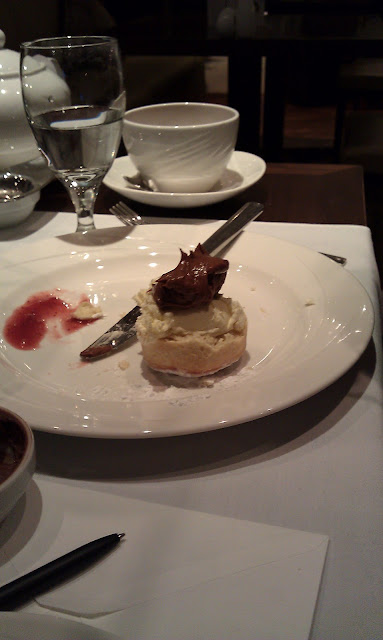 The scones. I think scones are like the hygiene factor of a tea. As in, no one cares if they are good, but they care if it's bad. Industrial Relations course. Go figure. The scones were good. Light, fluffyish. They are even served warm which is usually a bonus bonus in my eyes. But even though we asked for the mixed selection, no chocolate chip scone could be found :( We countered it with a mound of chocolate spread on a plain scone instead. The same problem happened when my sister in law went.

Would I go again? I think my vote is no. There's better out there. It was worth it for the once, but there's a slab of chocolate plate sitting downstairs still and my friends don't have the sugar tolerance that I do and didn't even make it to the cupcakes. xx
Posted by pink-kimono at 21:49